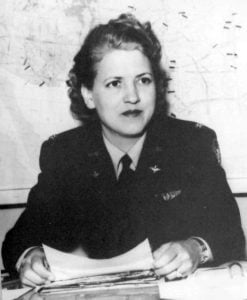 I might have been born in a hovel, but I determined to travel with the wind and the stars,
~ Jacqueline Cochran

We cannot begin to tell the stories of individual WASP until we have told the story of the woman responsible for their existence. Jacqueline Cochran, although born into poverty in Florida in 1906, decided early in life to remove the word ‘can’t’ from her vocabulary. As a child she loved the sight of an airplane and believed one day she would fly.

Cochran earned her pilot certificate in 1932 and in 1934 she entered her first air race. By 1935 she competed in her first Bendix Air Race and, also owned a successful cosmetic company.

In 1937 she won first place in the women’s division of the Bendix race. She was awarded her first of 15 Clifford Burke Harmon International Trophies of the International League of Aviators as the outstanding woman flyer in the world. In 1938 she took first place in the Bendix Transcontinental and received the General Willie E. Mitchell Memorial Award as the person making the greatest contribution to aviation that year. She went on to break many speed records and earned many other awards for her flying.

In 1939, as Nazi troops began invading countries in Europe, Jacqueline Cochran considered the possibility of America becoming involved in a war and the potential need for women to assist in flying America’s military aircraft. She conferred with Eleanor Roosevelt and, at her suggestion, approached General Hap Arnold with her plans for using women pilots. He rejected her plans. 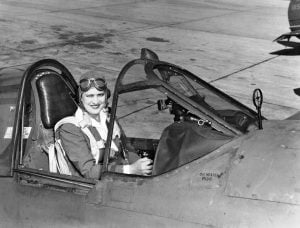 However, two years later, in 1941, General Arnold asked her to go to England to take a look at a program in which women pilots were flying with the Royal Air Force. (During that time, she became the first woman to pilot a bomber across the North Atlantic.)

General Arnold and Britain’s Chief of Air Missions asked her to organize a group of twenty-five American women pilots to fly for Great Britain. She accompanied those women pilots to England and remained there to assist with plans for the newly arrived American 8th Air Force.

By the Spring of 1942 there was a severe shortage of male pilots in the U.S. General Arnold asked Cochran to return to the United States and execute her plan to train women pilots to fly America’s military aircraft. On September 11, 1942 she was appointed Director of Women Flying Training for the United States. The first class of women pilots reported for training at the Houston Municipal Airport on November 11, 1942. Three months later, the program was moved to Avenger Field in Sweetwater, Texas.

The experimental flying training program was successful resulting in Cochran being appointed to the General Staff of the U.S. Army Air Forces in 1943 to direct all phases of the Women Airforce Service Pilots (WASP) program at 120 air bases all over America. 25,000 women applied to the program. 1,830 were accepted, and 1,074 earned their wings. On 20 December 1944 the WASP program was abruptly discontinued, and the WASP disbanded.

Jacqueline Cochran went on to conquer more aviation challenges, flying more air races and exploring more frontiers of aviation than any woman before her, breaking through the glass ceiling and the sound barrier —  from  rags to riches she blazed a trail for other heroic women to follow. She was truly ‘one of a kind’.

What made Jacqueline Cochran special? There is really no recipe for that kind of success, but her message for the next generation was: “If you will open up your power plants of vitality and energy, clean up your spark plugs of ambition and desires, and pour in the fuel of work, you will be likely to go places and do things.”