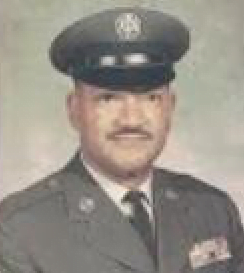 James Lee Bynum was born on a farm in Lexington County, S.C., on Jan. 6, 1921, but grew up in Philadelphia, where he attended elementary and junior high school. He began boxing as an amateur, rising through the Golden Gloves ranks as a light heavyweight.

After joining the Army in 1941, he entered the 95th Engineers Battalion he was assigned to the 95th Engineers Battalion at Fort Belvoir, Va., he worked on the 1,600-mile Alaska Highway that passed through the rugged mountains of Canada. Other projects included a D-Day training camp for invasion troops in Wales and road repairs after battle damage.

A few months after the war, Bynum left the Army to return to civilian life but quickly grew dissatisfied. He’d served in Gen. George S. Patton’s 3rd Army and recalled its segregated status when he was overseas. He also never forgot the treatment he received applying for a civilian job in Philadelphia, where he grew up the seventh of 10 siblings.

“‘He’s Black,’” Bynum remembered a secretary telling her supervisor. “I never did see the boss. He was always somewhere else.”

Given 90 days to reenter the military, he made the call on Day 89.

“That was a life-changing thing for him,” Sinkfield said.

In less than three months, he was back in uniform at Fort Meade, Md., and then was assigned to the 332nd Fighter Group at Lockbourne, Ohio, the last home of the Tuskegee Airmen.

He initially was under the command of Col. Benjamin O. Davis, running the officer billeting office. He tracked the unit’s inventory, working with then-Lt. Daniel “Chappie” James.

Bynum had planned to be on a float made by the 433rd Airlift Wing in the Fiesta Flambeau parade, but couldn’t make it after falling ill, said his stepdaughter, Dolly Adams-Willis, 62, a retired special education teacher and administrator in San Antonio.

“He was very proud to be a Tuskegee Airman,” she said. “He loved sharing his stories with youth, he enjoyed going to the events, being included at the Lackland AFB training graduation. He took an honor flight to the World War II Museum in Washington, D.C.”

“It’s like it gave him a sense of belonging and honor in his later years because whenever they called, he went,” she said.

Bynum’s 30-year career took him from Japan and Washington to Supreme Headquarters Allied Powers Europe, called SHAPE, in Paris. When he retired in 1971, he was the postmaster at Lackland AFB.

Bynum worked in real estate in retirement, enjoyed golf, and traveled with his wife, Dorothy. Adams-Willis said he outlived all his siblings, his wife and a daughter. His calm, level-headed demeanor “just seems to be a family trait; nothing rattles him,” Adams-Willis said.

In January 2021, the San Antonio military community honored Bynum on his 100th birthday with a parade in his name.