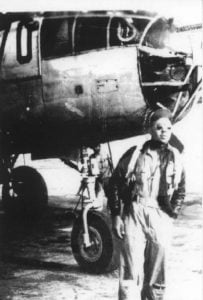 James C. “Jim” Warren was a member of the world famous “Tuskegee Airmen” and served in WWII, Korea, and Vietnam, flying 173 combat missions.  James C. Warren did not fly in combat during WWII, he was initially as Aviation Cadet in Class 44C in which he was subsequently eliminated from. He completed Aerial Navigation Training at Hondo AAF on 19 August 1944 and Bombardier Training on 9 January 1945. He was assigned to the 477th Bomb Group.

His flying career of over 12,000 hours was highlighted by being selected as the navigator of “Homecoming One” the first C-141 to fly into Gia Lam, North Vietnam, to return the first group of American POWs to Clark Air Base, Philippines. He was part of the Apollo recovery team flying the crew from Pango Pango, American Samoa to the Manned Space Center in Houston.

James was born in Gurley, Alabama in the racially segregated world of the deep south. When he was 15, his mother saved enough money to get him a ticket to Island Park, Illinois and it was there that he entered high school.

“It was quite a change for him, coming from a two-room school in Alabama to a high school the size of a college,” his son noted. “But it was there that he had people help him to get his feet wet, so to speak, and he got his diploma.”

Warren knew, however, that a diploma in the hands of an African American didn’t necessarily mean success.

“There were still just dead-end jobs,” son Jim recalled. “But he saw an article about the first Tuskegee training and it inspired him to want to fly and he envisioned a future in the military.”

The Tuskegee Airmen were an all-black Air Force unit that fought in World War II — the first black aviators in the U.S. military. Warren served with the 477th Bombardment Group.

In all, Warren would go on to serve 35 years in the Air Force, including during World War II, Korea and Vietnam. He flew 173 combat missions in Korea and Vietnam and was the recipient of a number of medals including the Congressional Gold Medal, presented by George W. Bush in 2007.

But even more than his wartime engagements, Warren’s biggest battle and triumph was in helping to break down the barriers of segregation in the military and in society as a whole.

That began in earnest in 1945 when Warrant and some 100 other officers stood up against segregation in the military. They were arrested for entering the segregated officers club and charged with mutiny, a crime at the time that could have meant the death penalty.

“He risked his life and his career to stand up for what he believed: equality,” Jim Warren said.

When President Harry Truman took office, he freed the Tuskegee officers but they all had reprimands placed in their files and none were ever able to raise to a higher rank than Lt. Col. In 1995, their records were cleared by the U.S. Air Force during a convention of the Tuskegee Airmen.

Warren spent a lifetime promoting the history of the Tuskegee Airmen, helping to work on several movies about the unit, which, at the time, were not included in history books.

“He wanted to get the word out as often as possible about the African American participation in World War II and all armed conflicts of this country,” Jim Warren explained. “He felt it was important because it was a way to promote respect among the races. So, he was at every meeting, reunion, community event, you name it.”

And his efforts to spread the message went beyond those public events.

“He would visit the juvenile hall and talk to those kids about self-respect and dignity and looking at the big picture,” Jim recalled. “He was a fighter for dignity. He was retired, he didn’t have to do those things, but he wanted to.”

Warren also reached out to youth through the Nut Tree Airport’s Young Eagles program for many years, taking youngsters up on their first fight experience. And he may have been one, if not the, oldest flyer to earn a pilot’s license, getting his certification at age 87.

One of Warren’s most recent public outreach efforts came with the dedication of a 17-mile stretch of Interstate 80 in honor of the Tuskegee Airmen.

Senator Lois Wolk, D-Solano, said that Warren was instrumental in suggesting that she adopt a resolution honoring the Tuskegee Airmen and dedicating that portion of highway.

“It should remain that way forever, to hopefully inspire many young men and women to go as far as they can in our society,” she said on Tuesday.

“They rendered extraordinary services to our country despite the prejudices they encountered,” she said. “They were true Americans.”

Supervisor John Vasquez recalled that Warren didn’t only receive his pilot’s license at the Nut Tree Airport but was very active in helping youth learn about aviation.

“He never seemed to have lost his energy to give back to the community,” he said.

“He was the type of person who did what needed to be done and did not let a lot of people stand in his way,” his son Tim stated.