In recent months we explored the importance of the Tuskegee Airmen support personnel in our blog, and even took a closer look at women in these roles. For every mission, many important players came together to create success through maintenance, training, flight skill and countless other crucial pieces of the puzzle. It simply cannot happen without a cohesive and dedicated team.

Another one of these important support personnel that the CAF Red Tail Squadron is honored to acknowledge is Master Sergeant James Sheppard.

Sheppard, originally from Harlem, enlisted in the U.S. Army Air Corps in 1942 at the age of 18. He was already a certified aviation mechanic, having earned his education from the Haaren Aviation Technical School in New York City. Sheppard was then assigned to Tuskegee Army Air Field and the 301st Fighter Squadron. 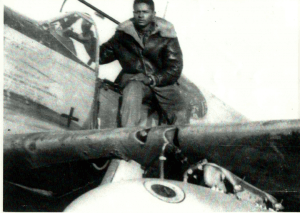 During his time with the Tuskegee Airmen, he was trained as an Aviation Maintenance Technician, and acted as Crew Chief earning the rank of Staff Sergeant. He deployed with the Squadron to Italy where his skill and leadership played a key role in the success of the group’s aerial combat missions. Their aircraft included P-51C Mustangs, P-47 Thunderbolts, P-30s and Curtiss P-40s, all of which he worked on during his service. 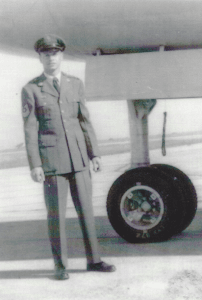 Unfortunately, even a war hero such as Sheppard had to battle ongoing racial discrimination, making securing employment difficult. Like his fellow Tuskegee Airmen, it took strength of character and courage to triumph over this adversity. He re-entered the civilian workforce in 1945 after the war ended, working for various airlines out of New York as an aircraft mechanic. He also served as a US Air Force Reservist for 10 years, where his experience and work as a flight engineer with the 436th Troup Carrier Wing earned him the rank of Master Sergeant.

Sheppard spent the rest of his career with the Federal Aviation Administration (FAA), retiring as a Supervisory Aviation Safety Inspector in the Flight Standards department who works to promote safe air transportation by setting the standards for certification and oversight of airmen, air operators, air agencies, and designees.

In 2011, CAF Red Tail Squadron pilot Alan Miller had the privilege of flying Sheppard in our P-51C Mustang Tuskegee Airmen. The Portland Press Herald covered the event with an article recounting the importance of the day, and how meaningful it was for Sheppard.

“As the loud engine shut off, Sheppard looked at those around him and said, ‘Now, can you imagine seeing 48 of those taking off at one time?’”

Another one of our pilots, Bill Shepard, also had the opportunity to meet Sheppard face-to-face. “We talked about our backgrounds and I got to hear first-hand about his experiences as a Tuskegee Airmen during the war. I have such admiration for him. What a wealth of experience,” he said. “I have pride for following in the footsteps of some great individuals, and they are proud of me for continuing the journey, and laying down more tracks for the new crop. Meeting airmen like James Sheppard simply makes me want to do better.” 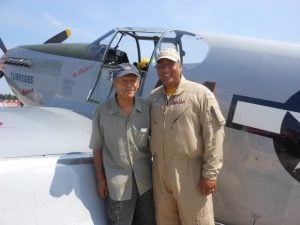 On behalf of the CAF Red Tail Squadron, we salute Tuskegee Airmen MSgt James Sheppard for his service to our country and for continuing to inspire generations to come with his example of determination and heroism.