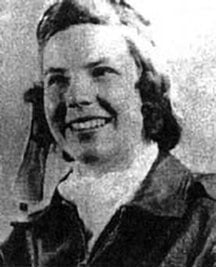 Jayne was born in Seattle and the eldest of three. The family moved to Preston, Washington, where she completed high school with honors and as a class officer. She was outgoing, became a cheerleader, edited the school yearbook, made the honor roll, participated in band and choir, and was a class officer.

She attended the University of Washington where she majored in art. She was in the tri deltas and worked full time in the summer and part time during school at a bank. At the bank she met Don Smith and the became engaged. When war broke out, she moved to Yakima, Washington, learned to fly, and joined the WASP.

It was a Sunday afternoon in Sweetwater, Texas. The air was clear, visibility unlimited, and winds were out of the S. E. at 15 miles per hour. Jayne was in basic training with class 44-6, was only 8 days from her 23rd birthday, and had accumulated over 71 hours of flying with just over eleven in her AT-6. Mary was in the advanced training phase with class 44-4 and was also flying an AT-6. Mary had just over 48 hours in this type of plane and a total flying time of 163 hours. With the graduation of 44-3 on April 15, 44-4 were now the seniors at Sweetwater. It was about 13:15 and Jayne was practicing touch and go landings as part of her basic training requirements and was on her 8th attempt. Her first three were with her instructor, the last 5 were solo. There was a lot to do and Jayne was busy, getting the landing gear down, watching her speed, setting the flaps, and other things. She was also in radio contact with the tower. Mary, in the advanced phase of her training, was on the return leg of a solo cross-country flight to San Antonio, had a more time to get ready, and was more comfortable with her plane. She was looking to the tower for visual directions. Jayne was entering traffic over Avenger field on a 45-degree leg to the downwind leg from an easterly direction. Mary was also entering traffic on a 45-degree leg to the downwind leg from a westerly direction. They were both at about 800 feet altitude had turned into their base leg, perpendicular to the runway, and were now headed right at each other. It was now 13:20. Mary, having more flying experience was looking around for other aircraft.   She spotted Jayne’s plane and turned to avoid the collision. However, it was too late and Elizabeth’s plane rammed into Mary’s. Jayne was pinned in and could not eject. Mary jumped, but she was too close to the ground and her parachute didn’t have a chance to open. Mary was 25 years old. On April 17, 1944, a forty-five-minute memorial service was held. Many were in attendance including all the new trainees for class 44-9 which had just started their first week of training the day after the crash. Mary’s closest friend in training was Dorothy Herthneck. Dorothy believed the fault rested with the tower. After the accident the overhead approach was changed to 4,000 feet before entering to land.

There have been many books about the Women Airforce Service Pilots of WWII (WASP); however, hardly any about the 38 women who lost their lives while flying for the Army Air Corps. This book tells their story.
“To Live and Die a WASP: 38 Women Pilots Who Died in WWII”