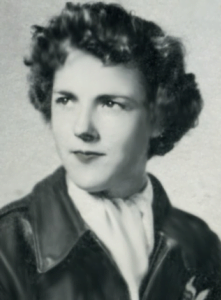 Already a licensed pilot, Jeanne became a professional in the visual arts.  During World War II, she interrupted her studies at Philadelphia’s Museum School of Art to volunteer to serve her country.  Already a licensed, experienced pilot, Jeanne put her studies on hold and applied to become a WASP.  She was accepted into Women Airforce Service Pilots training Class 43-W- 5.

Jeanne and 126 other young women pilots arrived at the 318th Army Air Force Flying Training Detachment, Avenger Field, Sweetwater, Texas on March 26, 1943.  After completing over five months of flying training, she was one of eighty-five who graduated, earning their silver wings.

After graduation Jeanne was sent to Dodge City Army Air Base, Dodge City, Kansas where she completed B-26 transition flight training. She was then transferred to the Flexible Gunnery School at Harlingen Army Air Field, Harlingen, Texas, where she flew B-26 tow target missions, training gunners for combat.

After the WASP were disbanded and World War II over, Jeanne competed in the 1948 “Powder Puff Derby.”  Subsequent service with the U.S. Air Force during the Korean War included assignments in public relations and intelligence. Discharged from the military in the rank of captain, she continued federal services as a civilian air traffic control specialist stationed at Albuquerque, El Paso, Yuma, Palmdale terminal and for ten years at Los Angeles LAX, retiring from the Federal Aviation Administration in 1983. In addition to her career in the aviation field, she worked as a commercial artist, model, welder, charter pilot and guest house operator. She had a lifetime interest in art and accomplished many works in multimedia.