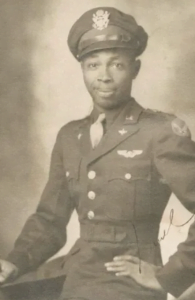 Major Jewel Barton Butler, Sr. was born 6 June 1922 in Denison, Grayson County, Texas, to Edward Arthur Butler, and Louise Hill Stewart-Butler. Jewel was the second son (third child), of 11 children. Four of those sons served in WWII in various branches of the Military. Those branches included the Marines, Merchant Marines, and the Army Air Force. Later, the youngest son served in the Navy, during the Korean Conflict.

Jewel graduated from Terrell High School, Denison, Texas, on 29 May 1940. He started his military career, at Tuskegee, Alabama as a 2nd Lt pilot, flying the P-40, P-39, and P-51 type aircraft, with the 12th and 15th Air Force. His Commander was Colonel Benjamin O. Davis, Jr. The “Red Tails,” also called the Schwartze Vogelmenshen (Black Birdmen), by the Germans, flew missions in North Africa, Sicily, and Europe. White American Bomber crews reverently referred to them as “The Black Red Tail Angels.” They earned this name because of their reputation for their tenacious escorting of the bombers to bombing missions over strategic targets in Europe. Their squadron had already distinguished itself over North Africa, Sicily, and Anzio, joined three other Black Squadrons: the 100th, 301st and 302nd. These four squadrons comprised the largest fighter unit in the 15th Air Force. From Italian bases, they also destroyed enemy rail traffic, coast-watching surveillance stations and hundreds of vehicles on air-to ground strafing missions. Sixty-six of these pilots were killed in aerial combat, while another thirty-two were either forced down or shot down and captured to become prisoners of war.

These Black Airmen came home with 150 Distinguished flying Crosses, Legions of merit, and the Red Star of Yugoslavia. The demands for parity and recognition as competent military professionals combined with the magnificent war record of the 99th and 332nd, led to a review of the U.S. War Department racial policies.