Bill Shepard, CAF Red Tail Squadron P-51C Mustang pilot and Vice President of Education for the Commemorative Air Force, shares his thoughts on a recent event in Detroit that made a big impression on local youth. Thanks Bill for your hard work and dedication to honor the Tuskegee Airmen and inspire people through their story!

As a member and supporter of several entities that honor the Tuskegee Airmen –Tuskegee Airmen, Inc., Tuskegee Airmen National Historical Museum and the Commemorative Air Force Red Tail Squadron – I’ve had the opportunity to collaborate with several groups, while wearing multiple hats (or as a warbird pilot, should it be parachutes?!). 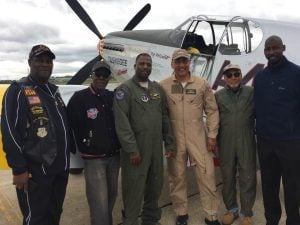 In May, I represented the CAF Red Tail Squadron’s tribute to the Tuskegee Airmen in a joint mission with the Detroit TAI chapter and the National Museum to support this summer’s air show and open house at Selfridge Air National Guard Base. This location plays an important role in the history of the Tuskegee Airmen experience, and when the call came to participate in their educational event, I agreed that this was a great opportunity for collaboration to engage kids and the community with our important message. Working together, that message was even more impactful.

The event at Coleman Young Airport gave local students a chance to experience many new aspects of aviation. They learned about both civilian and military aviation-related careers, including exciting opportunities outside the cockpit that they may not have considered or known about.

Giving kids the chance to touch, feel, hear and see a warbird up close is exciting and inspiring itself, but these aircraft help to humanize the experience of the Tuskegee Airmen and are a tangible way for young people to relate to something that ordinarily may seem too far removed from their modern life.

Together, we were all able to collectively utilize our passion and understanding of the Tuskegee Airmen’s legacy to help infuse these young people with inspiration to make good choices and set and pursue high goals for themselves. This is the power of the Airmen’s narrative, and the power of our organizations to be such a strong force for positive change in our communities.

The CAF Red Tail Squadron will also be in the Detroit area for several other events this year, including Focus: HOPE and Thunder Over Michigan. The Selfridge open house will be held August 19-20, and will include the CAF’s RISE ABOVE Traveling Exhibit mobile movie theater and the P-51C Mustang Tuskegee Airmen. We will be at the event to continue to share the stories of the Airmen at this historic home of the Tuskegee Airmen’s 477th Bombardment Group. 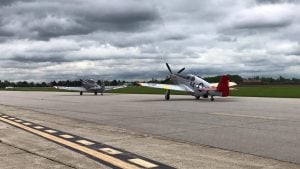 A T-6 from the Tuskegee Airmen National Historical Museum followed by the CAF Red Tail Squadron’s P-51C Mustang piloted by Bill Shepard at the event.

We’re proud to show our support for the youth of Detroit. Thanks to all the members and volunteers who made this joint mission a success!