Julian H. Johnson was born to parents Julian S. and Evangeline E. Johnson on December 8, 1924 in Chicago, Illinois. He is a graduate of A.O. Sexton Elementary School; Tilden Technical High School; and the Illinois Institute of Technology (IIT), all located in Chicago. At IIT, Julian majored in chemical engineering. In 1950, he earned his Bachelor of Science degree in Engineering.
Julian is a life-long member of St. Edmunds, having joined the church when he was 11 or 12 years old. He was confirmed there in 1937 and served as an acolyte and was a member of the church’s Boy Scout Troop as a youth. Julian continues to serve St. Edmund’s as a faithful parishioner and steadfast member of the Men’s Club.

Julian graduated from high school in 1942 and began working at National Starch Products as a Lab Assistant while attending IIT at night, with a focus squarely on his studies and preparing for his career. But as the war waged on in Europe and the Pacific, military service and Uncle Sam’s plans soon took precedence over his own. In the spring of 1943 he received a nice, personalized notice from the local draft board for an all-expenses paid opportunity to travel and see the world.

In April 1943, with his invitation in hand, Julian entered the services and was assigned to the U.S. Army’s Coastal Artillery Corps. In May he shipped out to Camp Stewart’s anti-aircraft artillery training center located about 40 miles southwest of Savannah, Georgia.

By the time Julian completed artillery training he had earned a pair of stripes and the rank of corporal, but aspired to become an officer (Public Law 99 was enacted 6/3/41 which allowed enlisted men to apply for flight training). However, Julian knew that very few Negro applicants were being accepted to Officer Candidate School (OCS) programs. But for every closed door, another is opened and fortunately, one of the junior officers in his chain of command suggested that Julian apply for Air Corps Cadet School, he did and was accepted. In January 1944, Corporal Johnson was transferred from Camp Stewart to Keesler Army Air Field in Biloxi, Mississippi for physical and psychological testing and evaluation and his preliminary introduction to the field of military aviation.

Julian cleared the Keesler hurdle and was transferred to Tuskegee Institute for pre-flight training and further testing to determine whether he would become a pilot, navigator or bombardier. At Tuskegee he was informed that his stanine score (a method of scaling test scores based on a nine-point standard scale first used by the U.S. Army Air Corps during WWII), qualified him for acceptance into the Bombardier training program. The pilot selectees were to be sent to Moten Field, the navigator selectees to Hondo Field, and the bombardier selectees to Midland.

At this point, the pilot selectees from his class were sent to Moten Field for primary pilot training and the navigator selectees were combined with other navigator selectees from class 44-J and this combined class was transferred to Hondo Field to complete their technical training assignment. However, the combined class was deemed to be too large (or perhaps now just had too many black personnel assigned) to be integrated into the training program. Julian, along with others from his class, received orders to report back to TAAF and await further instructions.

While waiting for the next navigator class (at Hondo or San Angelo) the interim 6-week period (July to August 1944) was filled with a short-term Flexible Gunnery School training assignment at Tyndall Army Air Field in Florida. After completing the Tyndall assignment and 13 flying hours in the B-24, Julian was awarded Aerial Gunner Wings and returned to TAAF. Shortly thereafter, Navigator/Bombardier class 44-K was transferred to Midland Army Air Field, Texas and there became part of Bombardier class 45-4B.

While at Midland Bombardier School, Julian trained in the AT-11 aircraft accumulating an additional 124 flying hours and earning the aeronautical rating of Aircraft Observer (Bombardier), effective 27 January 1945.

Following his military service and four years at IIT, Julian was employed briefly by Corn Products in a pilot plant operations process in Argo, Illinois. Soon after, he moved to Joliet, Illinois to join the Ordnance Ammunition Command (OAC), as an Inspection Specialist. In this capacity Julian was responsible for operating procedures, inspection and testing in solid propellants and explosives. He held this position at OAC for 4 ½ years before moving out west in July 1956 to join the Rocketdyne division of North American Aviation, in Canoga Park, California.

At Rocketdyne, Julian was part of a team that had responsibility for equipment related to the functioning of large rocket engine test stands. Later he worked with the Atlas Fuels Program as a Senior Research Engineer where he was engaged in the electrochemical research arena that had responsibility for high vacuum line synthesis of fuels and the determination of physical properties of hydrazine and other amines (organic compounds that contain nitrogen). Following this research Julian worked on the formation of Chlorine Pentafluoride (a compound first synthesized in 1963) electrochemically from chlorine and chlorine trifluoride. Julian worked for Rocketdyne for 11 years before returning to Chicago after opportunities in the aerospace industry began to decline. Julian joined the research lab at Armour Dial¸Inc., which produced soap made from tallow, a by-product of their meat production processes. When Dial moved their research lab to Phoenix Arizona in 1971, Julian found employment with Wetco Chemical Company in their metal treating chemical division where he worked for 5 years. Prior to retirement, Julian also worked for Soft Sheen Products (research engineer) and R.R. Donnelley Company (Corporate Engineering Dept.).

CHICAGO (WLS) — On the eve of Veterans Day, 10 veterans from World War II to Afghanistan will receive a special recognition Thursday night.

Two of the veterans are from Chicago, though they had very different experiences serving in World War II.

“There are Germans in front of us, there are Germans behind us, to the right of us and the left of us, and they are an uncoordinated as we are, but we have a mission,” said George Klein, Army Ranger.

The D-Day mission was to climb the cliff and take out the German guns at Pointe du Hoc, on the French coast between Omaha and Utah beaches. Platoon leader George Klein and his fellow Army Rangers took the hill and for two days held a nearby supply road choking off German reinforcements. Casualties cut the platoon in half.

“The assumption was at headquarters that we had been wiped out because there was no communication. The radios didn’t work,” he said.

In close-quarter fighting, George took a bayonet to the leg. He patched himself up and kept going until he could go no more. An explosion later nearly killed him, but he survived. His Purple Hearts, Bronze Star and other medals speak to courage under fire. He was on a ship coming home when the end of the war was announced.

“I was there. Ready, willing and able, and didn’t get the chance to show whether I could or couldn’t,” said Julian Johnson, a Tuskegee Airman.

Julian Johnson had a far different wartime experience. The Army trained him as a bombardier, a navigator, and a pilot. His skills were fine, but he was never called to use them in combat. It didn’t sit well that Johnson and other African American officers had objected to a segregated officers club and swimming pool.

“You have one little path because of the color of your skin. There’s no other place for you,” Johnson said.

It was an experience in frustration, but Johnson proudly wears his Tuskegee Airmen cap.

Two men of different color and different experience shared this: that the real salutes belong to those who didn’t make it home.

“And I’m here and they’re gone. I guess that in a sense bothers me more than anything else,” Johnson said.

“When I go to these things. People say you’re a hero. I say that’s a bunch of bull [expletive]. The heroes are the ones still over there,” Klein said.

Long after war’s end, Klein was introduced to the term “survivor’s guilt.” he acknowledges there’s something to that.

Johnson bears a different kind of wound – one that he says left him disappointed, though not angry.

Julian is almost 92. George is 95. Both went on to live good lives after their wartime experience. And whether or not they are comfortable with it, the salutes will be for them. 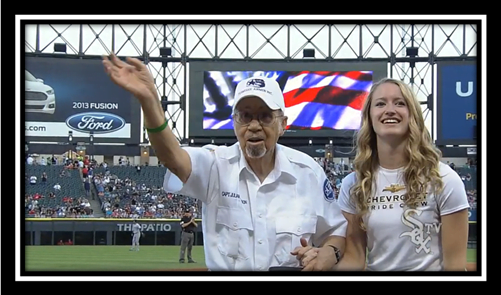 Capt. Julian H. Johnson was honored by the Chicago White Sox on 8-24-13 as the team’s “Hero of the Game”.  This game was significant as it was also the annual “Civil Rights Game” which honors America’s civil rights pioneers.  Along with the Tuskegee Airmen, the Montford Pointe Marines, the Triple Nickel, the 761st Tank Battalion (“The Black Panthers”), the Transportation Corps known as the “Red Ball Express” and numerous other under recognized service men and women helped ensure that America and her allies would prevail during WWII.

The Tuskegee Airmen (“Red Tails”), like Capt. Johnson were both civil rights pioneers as well as America’s first military aviators. Prior to Jackie Robinson’s integration of Major League Baseball, prior to Rosa Parks courageous stand leading to the Montgomery Bus Boycott and culminating in the integration of Montgomery’s bus system, the Tuskegee Airmen, fought racism both at home and overseas.  A little-known aspect of civil rights history Involves the story of how a group of Tuskegee airmen, by refusing to live in segregated quarters, triggered one of the most significant judicial proceedings in U.S. military history. For more information, read more about the THE FREEMAN FIELD MUTINY.