Adams was born and raised in Durham, graduating from Durham High School in 1937. As a child, Adams had loved learning about anything having to do with aviation. While studying at Duke University, she got the chance to take a Civilian Pilot Training (CPT) course. Colleges and universities around the country offered CPT programs, but they accepted only one woman for every ten men. Adams “jumped at the chance” to take the class and drove from Durham to an airfield east of Raleigh to take the flying lessons. She graduated from Duke in fine arts in 1941 and enrolled in the Air Force as a WASP in 1943.

Kate Adams did not have enough flying hours to qualify for the first class of women who joined WASP. But when the program reduced the number of flying hours required, she was accepted. After training, she worked at Napier Field in Dothan, Alabama. She conducted solo flights to test AT-6 planes that had been repaired, and she ferried planes from Napier to other United States bases. Then she worked as an instructor for flight cadets.

Adams met her husband while working at Napier Field. One day, just as she was landing, a severe dust storm hit the landing field. A strong crosswind gust caused her plane to nose up and drag a wingtip. Other cadets were trying to land, and she was afraid that because of the poor visibility in the dust storm, one might land on top of her. After the dust had cleared, an officer came to check out her accident. Later she recalled that when she took off her goggles, she “looked like a clown with two white spots around my eyes and everything else covered with dust.” Things worked out, though, because she later married the officer she met that day on the airstrip. When talking about that stormy day they met, she said, “He was the silver lining in that dark cloud.”

After the war, Adams and her husband, Robert, lived in Houston, Texas, for fifty-four years. When her husband died in 1999, she came back to live in Durham. When asked about her experiences with the WASP, she said, “I loved every second of it.”

In the 1970s, soon after their thirtieth reunion, WASP veterans were very excited to hear that the navy was training a small group of women to be military pilots. But media reports stated that this would be the first-time women had flown military aircraft. As Adams said, “The WASP got their stingers out!” Their story had never been told. For thirty years, the government had kept their records sealed, and not many Americans knew of their contributions. So, the WASP began to publicize their World War II service. Kate Adams did her part. She gave interviews, spoke to interested groups, and continued to attend annual WASP reunions. Adams also donated her uniform and related photographs to the North Carolina Museum of History. By the time she died in 2002 at the age of eighty-three, the WASP had begun to achieve more public recognition for their service during World War II.

Kate Lee was a seasoned world traveler. She told her friends that “go” was her middle name. She loved history and art and most enjoyed her trips to China, Russia, and Egypt. Her tour group was one of the first to be allowed into China. She commented that the tourists themselves were a huge attraction, as many Chinese had never seen a Caucasian face. 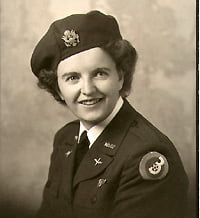