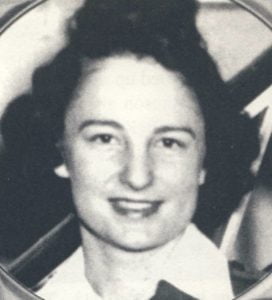 Katherine Rawls Thompson joined the WAFS as Nancy Love’s 21st pilot. She was already a skilled aviator with over 675 hours to her credit.

Katherine Rawls was born June 14, 1917, in Nashville, Tennessee, but the family moved to Florida by the time she was five. “My father had a job helping building roads, until the Depression when he became one of the original farmers in Belle Glade,” she told a reporter interviewing her for a newspaper article January 14, 1982. “When he was building roads, the families all lived together in camps. The camps were next to lakes and there was nothing else to do but swim.”

The entire family – she had three sisters and a brother – swam competitively and Katie’s father coached her early efforts. From 1930 through 1939 Katie was considered the greatest woman swimmer of them all. She not only swam but was a diver as well. At age fourteen, she won a silver medal in springboard diving at the 1932 Olympics held in Los Angeles. She was the first woman from Florida to have membership on an Olympic swimming and diving team. In 1933, at age fifteen, she became the first woman ever to win national championships in four separate events in the same meet. The events included springboard diving, 200-meter breaststroke, half mile freestyle and 300-meter individual medley. She would repeat the four event national championships in a later meet. Throughout her career she won thirty-three national championships. She won another Silver Medal in springboard diving at the Berlin Olympics in 1936. In addition, at Berlin, she was on the bronze medal winning 440-meter swimming relay team and finished sixth in the 100-meter freestyle. For 8 years she was undefeated in the most versatile event, the individual medley (3 stroke). Until Tracy Caulkins came along and broke her record in 1981, Katie Rawls had won more national swimming and diving championships (thirty-three) than anyone.

By 1937, Katherine had met and married Ted Thompson, who then became her coach for the remainder of her time in competition. But according to WASP Iris Cummings Critchell (43-W-2), who swam with and against her in national and Olympic competitions from 1935 – 1939, all the young swimmers and divers knew the war in Europe spelled the end of the Olympics – at least for the duration. There would be no games in 1940. All, including Katie and Iris, turned their energies elsewhere. As it happened, they both turned to flying and eventually ended up as part of the WASP.

Ted Thompson also was a pilot and an instructor who ran a flight school. He taught Katherine how to fly. With her superb coordination and athletic conditioning, she took to it like an eaglet to flight. They owned a hangar and a rough-cut landing strip in Fort Lauderdale and stayed in the flight school business until the war came. Then the Navy took over Ted’s flight school and he joined the RAF as a pilot.

In September 1942, Katherine also got her chance to fly for her country when she joined Nancy Love’s WAFS as number twenty-one and went to Romulus in January 1943. Then on September 30 of that year she was sent to Palm Spring with a small group under Evelyn Sharp’s command. Rumor was they were to transition into pursuits, but nothing happened. In the meantime, Ted had returned from the service and wanted his wife home.

“She left Palm Springs soon after we arrived and went home,” said WASP Mary Lou Colbert (43-W-1), who was part of the Palm Springs group. She did stay long enough to be in a photograph taken of the group.

“When Ted finished, he wanted her to stay home and be a cookie-baking momma, which she wasn’t about to be.” Alicia Komlo said in a 1982 interview.

Eventually Katherine and Ted were divorced. She married again but chose to use her maiden name. She also returned to the water and became a swim pro and pool manager at The Greenbrier in White Sulphur Springs, West Virginia.

A superb athlete and skilled pilot, Katherine Rawls succumbed to cancer on April 8, 1982.