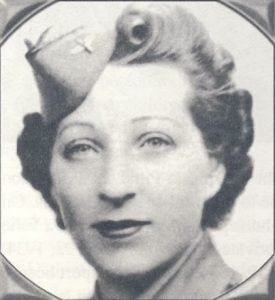 Kathryn Bernheim Fine WAFS, Class “The Originals” February 1, 1911 – June 24, 1996 Planes flown: PT-19, PT-26, P-40, P-39, P-47, P-63, B-17 Base assigned: New Castle Army Air Base (Wilmington, Del.) Kathryn “Sis” Bernheim was born Kathryn L. Strouse in Rockaway, New York. She was a graduate of Woodmere Academy in Woodmere, New York. “Within a short span of years in the early 1930’s, my mother, my father, first husband Maurice Bernheim, and my grandmother all died.” she told aviation author Same parker, for an article that appeared in the American Aviation Historical Society Journal, summer 1995. “I was really down in the dumps, when, unexpectedly, something positive happened that changed my life forever. “When I was a teenager, I had had a few pleasant aviation adventures. I often talked about them, and my brother-in-law remembered. Trying to help me recover to my old cheerful self, he encouraged to take flying lessons at the Roosevelt Field on Long Island. It was summer 1934. His advice turned out to be some of the best I received.” At Roosevelt she was taught by Sig Uyldert and soloed on November 14, 1943 in a Taylor Cub, obtaining her private pilots license shortly after that. In 1938, Sig invited her to join him as a partner in his flying business. They rented an office and storage space at Hangar 9 for their three aircraft: a Travel Air 16K, a Piper J-2, and a Piper J-3C-50. She knew Jacqueline Cochran casually because Jackie flew in and out of Roosevelt Field before the war. Through Jackie, she had the opportunity in January 1942 to qualify to fly with the Air Transport Auxiliary in England. She went to Dorval Airport in Montreal, Canada, to take the compulsory flight test. She and another Original, Barbara Poole, were there at the same time. They and four other American women pilots were flunked by the check pilot, a regular RAF officer who made no secret of his belief that women were lousy pilots. 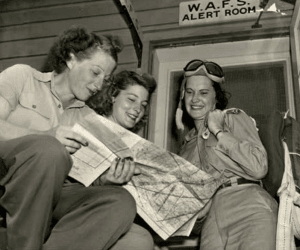 On January 6, 1943, Bernheim became number twenty-six accepted into the WAFS squadron and remained with Betty Gillies and the 2nd Ferrying Group in Wilmington her entire two years of active duty. She was given temporary duty assignments to instrument school at St. Joseph, Missouri, May 7,,1944, and to pursuit school in Brownsville, Texas, June 16, 1944. After pursuit school, from July 24 to September 12, 1944 – still as part of the Betty Gillies’ squadron – she was stationed in Farmingdale, Long Island, ferrying P-47’s from the Republic factory. She was then sent to Evansville, Indiana, for temporary duty at the modifications center there, ferrying P-47’s and P-51’s. She also flew the P-39, P-40 and P-63 and was co-pilot on the B-17. After deactivation on December 20, Bernheim remained on Long Island and looked around for another job in aviation. In May 1945, she returned to the Republic factory and was hired as a flight instructor, teaching members of the Republic Aviation Company Flying Club. She also worked as a flight instructor for the Lyon Flight School at Zahn Airport in Amityville. In 1947, she married C. Robert Fine, a sound recording engineer who had served as a Marine in World War II, and they had two children: Dugie and Robert. She continued to fly until her husband’s death in 1952, when she considered the risk factor too great while raising two children and quit flying. DID YOU KNOW: A minimum of 500 hours of flight experience was established but the 27 women averaged more than 1,100 hours each. The WAFSs were based in Wilmington, Delaware, and ferried planes from factories to air bases and embarkation centers throughout the country. Bernheim qualified to fly pursuit, cargo and training aircraft, but said in later interviews that the P-47 Thunderbolt was her favorite. While women did not fly in combat, she had more than her share of forced landings from equipment failures and thunderstorms in the Midwest. It was, she said, “the most exciting time” of her life. The women could prove themselves in the cockpit, but it wasn’t enough for politics and at the end of 1944, the WASPS were disbanded because, in the words of their commanding general, “higher authorities” had made the decision. Equality was more elusive than pilot competence; the Air Force refused to recognize the women as veterans and they received no benefits until 1977 (a full 33 years later) when a bill in Congress finally declared what they had known their entire lives – that they had served their country to their utmost in the desperate days of World War II, and that their focused performance of their duty was as important as their male counterparts. Sources: Texas Womens University The Unsung Heroines of World War II: The Story of the Women’s Airforce Service Pilots Action This Day