Kristin Swan Lent was born Sioux City, Iowa. She became interested aviation while attending the University of Iowa when a friend who was involved in the Civil Air Patrol (CAP) Program had an instructor take her up for a ride. She described that experience as “Being a wonderful feeling of leaving the earth and seeing everything laid out below you was as if it was a wonderful garden.”

While she had the dream to fly, she had no money as she was attending school on a scholarship, her parents wanted her home that summer and being 18 she went. Two maiden aunts from Sioux City invited her to come stay with them and one of them paid for her to attend a business school.

The bombing of Pearl Harbor happened shortly after she graduated business school and Kristin decided she wanted to do her part in serving her country. She took the Civil Service test and went to Washington, D.C. to work in Civil Aeronautics.

While there she heard of the Women Airforce Service Pilot program Jacqueline Cochran was heading up, she borrowed $300 to get her private pilot license so she could apply for the program. Within one month she obtained her license and was accepted into the WASP program.

Since she was civil service, she had to pay all expenses to get to Sweetwater, Texas where she was surprised at the dusty desolation. She and 100 other women were loaded into cattle trucks to go to Avenger Field. 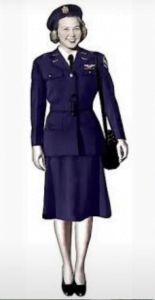 She and the women were entered into Class 44-W-3. Fifty seven of them graduated and earned the coveted silver wings and were the first class to wear the uniform designed by Jacqueline Cochran.

Graduates were given the choice of serving a ferry command or serving at a military base. Lent Gros elected to attend the B-26 school in Dodge City, Kansas but due to the number of new male pilots who needed to be trained she was reassigned Garden City, Kansas as a test pilot.

She said “a very exhilarating, lovely time,” but it was not without its close calls.

She was once scratched from a test flight of a plane fitted with a new wing and a new engine that crashed, killing the chief test pilot and two other men.

Another time she was mistakenly directed to land in the same space from which another plane was just taking off. “I made a steep turn,” she said, “which they told us you never could do in that type of plane.”

Lent Gros earned $150 a month and did her job with the understanding that, if she were killed, there would be no formal arrangements for what would happen next. “If you were killed, your buddies got together to raise money to send your body home.”

She was sent to Florida to take a course to advance in her advance instrument ratings. While there she received notice to return to her home base where she learned the WASP program was deactivated immediately.

Back at home she worked in a local drugstore to save money so she could return to Kansas City to earn her instructor rating and planned to continue flying.

Lent Gros tried to use her wartime flying experience to launch a career as a civilian pilot but no potential employers were interested in women in the cockpit. “We just accepted it, I guess,” she said. “Women were not really valued that much.”

During her time at Sweetwater she met Robert Lent who had come back from England and was stationed at Big Springs, Texas. They married in 1945.