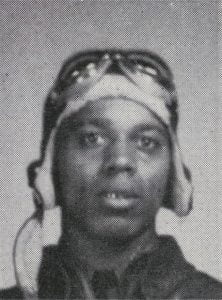 Langdon was born in 1918, in West Virginia, the son of Langdon Johnson and Nellie Woods. At the time of his birth, Langdon’s father was a cobbler for a shoe store. His father passed in 1928. Nellie, his mother, was the owner of the house in 1930, and Langdon was living there with his two brothers. All were living with their mother in 1940 as well, but Aaron the eldest was working in a coal mine while the younger two, Langdon and George, were attending school.

Langdon graduated from the Tuskegee Flight School on 28 May 1943 and in December of that same year he was deployed to Italy to join the 100th Fighter Squadron 332 Fighter Group.

He was based in Ramitelli, Italy and was part of an elite group of escort planes to bombers. He flew his first mission on the 5th of Feb.

A few weeks later, however, an escort mission would end in tragedy. After escorting bombers to Toulon, France, to destroy radar stations on Aug. 12, the 332nd Fighter Group began to anti-aircraft fire. P-51 Mustangs flown by Johnson and 2nd Lt. Joseph E. Gordon were shot down.

“Lt. Johnson was on my right at this time and I was being fired upon by at least 40mm on my left,” Capt. Woodrow W. Crockett wrote in a military report. “Lt. Johnson crossed over to my left and straightened on parallel to my plane and at this time his plane hit the water, ripping off the entire right wing, after which the remainder of the plane crashed into the sea. His ship seemed to have been hit by flak before crashing.” Lt. Johnson’s body was not recovered.

According to a government database, he was awarded an Air Medal with two oak leaf clusters and a Purple Heart for his military service.

Langdon Elmer Johnson is buried or memorialized at Tablets of the Missing at Rhone American Cemetery, Draguignan, France. This is an American Battle Monuments Commission location.