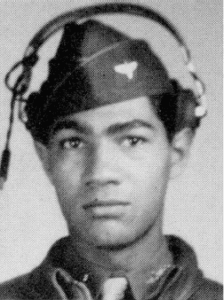 2nd Lieutenant Lawrence E. Dickson of Bronx, N.Y., graduated from flight training on March 25, 1943, at Tuskegee Army Air Field in Alabama in class 43C. In December, he deployed to Italy with the 100th Fighter Squadron.

On Dec. 23, 1944, Captain Dickson was part of a reconnaissance mission to Praha, Czechoslovakia, when engine trouble forced him to bail from his P-51D Mustang, nicknamed ‘Peggin’.

“Capt. Dickson called to me over the radio and told me that he was about to bail out,” 2nd Lt. Robert L. Martin wrote in a military report. “His canopy was jettisoned and the plane rolled over on its back. I did not see Capt. Dickson leave the plane and I was unable to observe a parachute because of the snow on the ground. Judging from the way in which the plane struck the ground, I do not believe the pilot (Dickson) was in the plane at the time of the crash.”

Dickson’s name is included on the Tablets of the Missing at the Florence American Cemetery and Memorial in Italy. According to a government database, he was awarded the Distinguished Flying Cross, an Air Medal with four oak leaf clusters and a Purple Heart for his military service.

In 1949, the Army recommended that his remains be declared “nonrecoverable.”

In 2017, the Pentagon, armed with new data on the crash location, began investigating the case anew.

In 2018 the Defense Department announced that it had accounted for Dickson. His ring, charred remains and other small personal items were found during a dig at the crash site near Hohenthurn. The dig was conducted by the Defense POW/MIA Accounting Agency, the University of New Orleans, and the University of Austria at Innsbruck, with help from the National World War II Museum in New Orleans.

Michael Mee, the identifications chief for the Army’s Past Conflict Repatriations Branch, presented Capt. Dickson’s daughter, Marla L. Andrews, with the ring and a formal report on how her father was accounted for.

On March 22, 2019, seventy-five years after his fighter plane crashed in Austria, Capt. Lawrence E. Dickson was laid to rest in Arlington National Cemetery as four Air Force jets roared overhead and his daughter and grandchildren looked on.