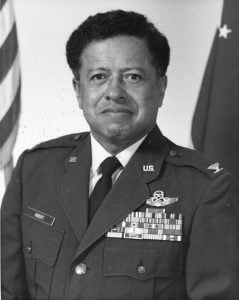 Lawrence Edward Roberts Sr. was born on December 9, 1922, in Vauxhall, New Jersey. He was married to Lucimarian Tolliver for 57 years. They had four children: Lawrence E. Roberts II, Sally-Ann Roberts, Dorothy Roberts McEwen Ricketts, and Robin René Roberts. He taught his children to live their lives without limitations. Roberts was an active member of the First Presbyterian Church in Bay St. Louis, Mississippi.

Roberts attended Howard University, received his bachelor’s from Morningside College, and received his master’s degree from the Tuskegee Institute.

He entered the United States Army Air Corps as a Pre-Aviation Cadet Private at Keesler Field in 1943 and was later assigned to the Tuskegee Airmen pilot training program in 1944. Roberts flew Piper Cubs, Boeing B-25 Bombers, C-54 transports and F-86 fighter jets. Colonel Roberts served in numerous flying, technical and command assignments. He performed duties as a jet fighter pilot in the Air Defense Command, a Flight Instructor at the fighter school at Williams Air Force Base, Ground Electronics Officer in Japan and Canada, Chief of Ground Communication-Electronics and Meteorological Maintenance for the Air Division headquarters, Department Chief for Ground Electronics and Officer Training at Keesler Air Force Base, Commander of NATO Communications, Organization and Chief Communications-Electronics and Logistics Advisor to the Vietnamese Air Force Headquarters and as Commander of the Maintenance and Supply Group at Keesler Air Force Base.

In 1975, Colonel Roberts’s military career came full circle. He retired after 32 years of service at the same base that he was first assigned to in 1943, Keesler AFB. He adopted the Mississippi Gulf Coast as his permanent home and for the next 29 years continued his deep involvement with KAFB and the surrounding community. During his tenure, Colonel Roberts served in numerous flying, technical, and command assignments. His impact was so great that the only Tuskegee Airmen Club in the state of Mississippi was named in his honor, the Lawrence E. Roberts Chapter, Tuskegee Airmen Inc./Keesler AFB, MS

On October 12, 2004 Colonel Lawrence Roberts passed away at his home at the age of 81. He was buried with full military honors. Services were held at the Triangle Chapel at Keesler Air Force Base near Biloxi and he was buried at Biloxi National Cemetery.

Since his passing, Roberts has continued to posthumously receive awards throughout the country. In 2004, the Mississippi State Legislature drafted a resolution honoring his life and legacy and on March 29, 2007, he received the highest civilian award bestowed by the federal legislature, the Congressional Gold Medal. President George W. Bush honored Col Roberts and other Tuskegee Airmen with the Congressional Gold Medal for their bravery, patriotism and the flying skills that helped persuade President Truman to desegregate the armed forces.

Likewise, on September 10, 2009, a new consolidated aircraft maintenance facility for the 403rd Wing at Keesler AFB was dedicated and named in Roberts’s honor.

Painting of Colonel Lawrence E. Roberts, Commander of the Maintenance and Supply Group at Kessler Air Force Base depicting some of his duties during his Air Force career