Lea Ola McDonald was born on October 12, 1921 in Hollywood, Arkansas. She moved to a farm near Seagraves, Texas where she was raised with her brother. She graduated from Plainview High School in 1938, then attended Wayland Baptist College for two years where she learned to fly in the CPT program. After that, she moved to Canyon, Texas to attend West Texas State College, graduating in 1942.

She then moved to California where she worked in a Douglas Aircraft Company factory. While there, she heard of the WASP and applied. She was accepted and took her basic training at the Houston Municipal Airport, Houston, Texas. She completed the course and was assigned to Avenger Field, Sweetwater, Texas in Class 44-W-3. She graduated in April 1944, and was sent to Biggs AAFB, Texas on active duty.

On June 21, while House members were debating the militarization bill, Lea McDonald, Class 44-W-3, was flying in a type of airplane she had never flown before. 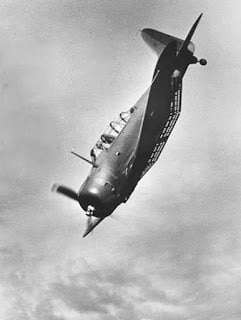 She had just returned from a three-week leave and planned to resign the following day so she could get married, but because she hadn’t yet officially announced her plans, she first had to fly solo in an A-24 dive bomber (RA-24B # 42-54423).

In a letter to Mary Martin, her former classmate, Lea said she was afraid to fly this “danger ship” that ever since the deaths of the WASPs in North Carolina the previous year, still had a bad reputation with the women.

Gripped by her fears, she asked for someone to fly with her, but superiors denied her request. After flying around the Biggs Army Airfield near El Paso, Texas for a while, she turned toward a landing approach.

Martin later said she believed that Lea was so nervous flying the A-24 that she set the unfamiliar flaps incorrectly. Instead of slowing her speed for a landing, she sent the plane into a sudden dive toward the Texas prairie. Her throat mike failed and she was unable to get help from the ground controller. One mile from the end of the runway, at great speed, the A-24 smashed into the ground and immediately erupted in flames.

“My best friend was killed in a crash,” Mary Martin said, “and we had to collect money to send her home.”

Four days after that fiery crash, Lea returned to Seagraves for her funeral in the Gaines County Cemetery.

Although usually accorded the privileges of a 2nd Lieutenant, WASP had no actual military rank. They were assigned to Civil Service. Paid $150 per month in training, and $250 per month when assigned to active duty, they had to pay for their own food, lodging, and uniforms. They received no travel pay or any other compensation.

In 1977, President Jimmy Carter signed Public Law 95-202 that recognized veteran status for WASP. Veteran benefits such as the G.I. Bill now became available. In 1984, more benefits were given, and all WASP received the World War 2 Victory Medal. Those who had served more than 1 year received the American Campaign Medal.

In 2010, the WASP were recognized, individually and as a unit, by the presentation of a bronze replica of the Congressional Gold Medal.