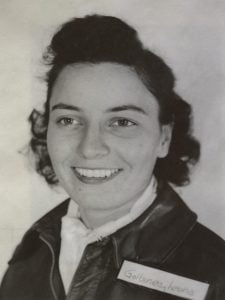 Leona was born on August 16, 1920, the fourth child of Anna and Joseph Golbinec. She graduated from Rossford High School and then from Bowling Green State University.

She was a member of WASP class 44-W-2 and, like all 112 trainees in her class, paid her own way to enter the Army Air Forces flight training program at Avenger Field in Sweetwater, Texas.  After seven months of flight training, she and 41 of her classmates graduated on March 13, 1944 and became WASP, Women Airforce Service Pilots.

Her official Army Air Force orders sent her to Napier Army Air Base in Dothan, Alabama, an advanced training base for cadets.  At Napier, she would have flown AT-6’s as an engineering test pilot, making sure planes that had been ‘red lined’ were fit to fly.  She might also have ferried PT’17’s and AT’6’s and flown administrative missions. She remained at Napier until the WASP were disbanded on December 20, 1944.  Like every woman pilot serving, she then paid her own way back home.

Leona’s participation as a WASP during World War II freed male pilots for combat duty and helped our country at a time when we were desperate for pilots.

After the WASP disbanded Leona returned to Rossford and taught at Eagle Point School. Her teaching career took her to California, to Hawaii, and then to Venezuela. There she taught the children of families working for Texaco and met and married an engineer, William (Bill) Zimmer.

They lived in Venezuela and Argentina until 1966, when Bill died suddenly. She returned to Rossford and worked for the Lucas County Department of Vital Statistics until her retirement in the 1970s.

As a retiree she volunteered as a Precinct Worker on election days, at WGTE (Toledo’s PBS station), and at the VA hospital. She was active in the American Legion and served as president of the Legion’s auxiliary.

She enjoyed traveling to the biannual WASP conventions as well as to Australia, Japan, Europe, and to visit family and friends all over the United States.