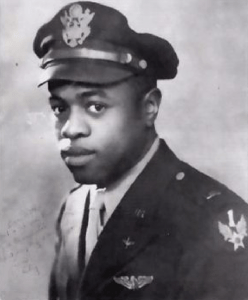 Battle was born in Harlem to Walter Battle and Margie Goldwire Battle (later Margie Battle-Smith). His father owned a candy store, and his mother worked as a cook and beautician. Both Walter and Margie Battle’s families had moved to New York from the rural South as part of the Great Migration.

Battle wrote in his autobiography that while his uncles played a major role in his childhood, he did not spend much time with his father. The summer after Battle completed fifth grade, his parents separated. Battle and his mother moved in with his aunt and grandparents, who lived on Fulton Street in Brooklyn.

Battle’s aunt and mother ran beauty salons, where he often did odd jobs. He remembered that “The Depression seems not to have too big an impact on our lives as far as I can tell.

It was in Brooklyn that Battle became interested in drumming. In order to take music lessons, he joined a Boy Scout troop run through the Bethany Baptist Church. Battle recalled that while the equipment was poor, the scoutmaster, Gary Talbert, was a “very kind and caring” man who became a father figure to him. Talbert arranged for the boys to take further lessons at the Harlem YMCA. After six months of training, Battle’s scout troop officially formed a drum and bugle corps. During his time in the band, Battle took part in five Anniversary Day parades.

In seventh grade, Battle got his own drum set from the Wurlitzer’s Music Company, where he arranged to take lessons for 25 cents apiece. After his mother recommended him to an affluent family in Bensonhurst, Battle became a music instructor himself, for the “exorbitant fee” of seven dollars a lesson.

Battle attended Alexander Hamilton High School in Crown Heights, where he played drums in the school orchestra and marching band. He also performed in the Al Bounds Orchestra, the Harold Cabbell Orchestra, and New York’s All-City Orchestra. On one occasion, his reputation as a musician saved him from being beaten up by a gang.

As a senior in high school, Battle played alongside Billie Holliday at the Three Deuces Jazz Club. Soon afterwards, he joined a traveling show that took him across the Southern United States. Due to the Jim Crow laws, Battle and the group usually had to sleep and eat on the bus.

LeRoy A. Battle, Sr. was inducted into the service on 23 August 1943 at Camp Upton, Long Island. Battle went through basic training at Keesler Field and continued on to the Tuskegee Institute.

After graduating from Tuskegee, Battle took a six-week gunnery program at Tyndall Field, where he learned to shoot down attacking planes. He and another black cadet played music at a dance for white cadets, in exchange for extra free time for the rest of the black trainees. At the dance, Battle was offended to find that he and his companion were hidden from sight behind a wall of palm trees. When asked to play again, he refused.

Battle graduated bombardier training at the Midland Air Force Base on November 4, 1944. He was assigned to the 616th Squadron of the 477th Bombardment Group 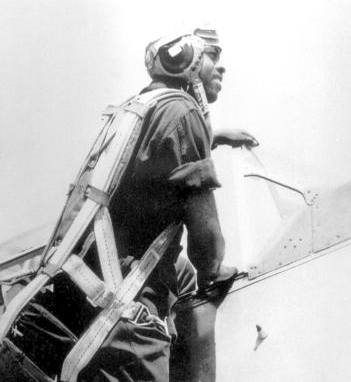 In 1945, the 477th Bombardment Group was transferred to the Freeman Army Air Force Base for advanced training, after which they were to be sent overseas. When the soldiers of the 477th discovered that they would not be allowed to use the Freeman officers’ club because of their race, they decided to protest. Battle was one of the first twenty black pilots who tried to enter the club. All twenty men were placed under arrest on 11 April 1945 for attempting to enter the “all-white” Officers’ Club. Battle recalled of the incident:

We went to the theater, then a bunch of us went over to the club. We brushed by [the MPs], went in and sat down. Col. Selway … put us under barrack arrest. They had a barbed-wire fence around our area. We could look out and see the Italian POWs walking around, going to the PX. We would meet in the lavatory.

The ‘mutineers’ were told to sign an affidavit apologizing for their actions and promising not to enter the club again. Battle and the other nineteen refused, despite the threat of court-martial. In his autobiography, he explained his reasoning:

We were very cognizant of the fact that, theoretically, because this was during wartime, we could be brought up on charges of treason, or mutiny, and consequently executed. There was a very real danger that this could happen. The idea of people taking aggressive civil rights action was not yet established in the public mind, much less in the context of the military with its far greater restrictions on personal liberties. Bear in mind that our actions came 10 years before Rosa Parks refused to give her seat to a white man in Montgomery, Alabama, and more than 20 years before Martin Luther King, Jr. marched on Washington. Still, we were committed to our cause, and believed that whatever the outcome, we had no choice but to proceed as we did.

Battle received a formal reprimand. He returned to training before being honorably discharged in on 13 October 1945. In 1995, his reprimand was finally expunged.

Immediately after his discharge he enrolled at the Julliard School of Music. In 1946, he enrolled at Morgan (State) College, graduated in June 1950 with a major in Instrumental Music and received his Master of Education Degree in 1961 from the University of Maryland.

LeRoy Battle taught music at the Frederick Douglass Elementary Junior Senior High School in Upper Marlboro, MD, for 22 years and is credited with raising the Frederick Douglass Music Department into one of our nation’s finest organizations. In February 2003, LeRoy was inducted into the Hall of Fame of the Maryland Music Education Association.

Battle tried to fight segregation in the Washington Redskins organization. He wanted the team’s marching band and cheerleaders, the Redskinettes, to be desegregated. Battle encouraged two of his band members to audition for the Washington Redskins band. Both men complained about the application process, claiming the Redskins organization wasn’t sending out applications to African Americans. Joel Margolis, the Redskins business manager said that “not many colored apply, Last year we had fifty one tryouts and only one was colored.” Battle said that advertising towards colored applicants were being ignored by the Redskins.

Battle also served as a guidance counselor and assistant principal. He retired in 1978.

While fighting with the Redskins, Battle continued to create music with his own jazz band. LeRoy Battle and the Altones became a very famous band in Maryland. They were given a regularly scheduled gig on the Tony Kornheiser show on ESPN Radio.

During the period 1992-1996 Battle worked in sessions with Eva Cassidy. On Cassidy’s (1992) album The Other Side, recorded with Chuck Brown, Battle is credited with trombone on “Let the Good Times Roll”, organ on “I’ll Go Crazy”, and trumpet on “Red Top”. Battle is also credited with engineering Cassidy’s 1996 album Live at Blues Alley.