During her first year at Texas Tech, Lillian Glezen made a bet with one of her sisters that, if she earned a “B” in math, she would get to ride in a small plane.  From that first airplane ride, she knew that she wanted to learn to fly.

Lillian Glezen Wray, affectionately known as “Jay” as well as “Nanny Duke” and “Grandma Turtle,” was born in Gilmer, Texas on Dec. 9, 1913 to Thomas Hamilton and Lillian Corn Glezen. The young couple had recently moved their growing family from Indiana to Texas.    Lillian was not only the youngest of eleven children, she was the only “native Texan” and a true tomboy.

When America was attacked at Pearl Harbor on Dec. 7, 1941, Lillian was working as a switchboard operator at the Southwest Phone Company in Waco, Texas.  After Pearl Harbor, she soon moved to Fort Worth and took a job at Consolidated Aircraft, working as an inspector on the B-24 assembly line.   She used part of her pay to take flying lessons.  When she had acquired the number of newly reduced minimum required flying hours (35), she applied for WASP training and was accepted into class 44-W-9.

In April of 1944, Lillian and 106 other young women pilots arrived in Sweetwater, Texas and reported to Avenger Field for WASP training. After seven months of AAF flying training, in November, 1944, Lillian and fifty-four of her classmates graduated, received their silver WASP wings, and became Women Airforce Service Pilots (WASP, the first women in history to fly America’s military aircraft).

She was then stationed at Goodfellow Army Air Base in San Angelo, Texas, where she flew AT-6s and BT-13s, training male cadets.  She also occasionally ferried PT-19s to other air bases.

On 20 December 1944, the WASP were disbanded and Lillian returned to Fort Worth.  She soon accepted a job with the CAA (now the FAA) in Alburquerque, New Mexico. After several years and transfers, she accepted a job in Region II in Salt Lake City, Utah as an air traffic controller. It was there, in 1947, that she met her future husband, Johnston Wray, who was also an air traffic controller.

Over the years, Lillian stayed close to her WASP friends attending countless WASP reunions all over the country.  She enjoyed a life-long sense of adventure and was always proud of the progress the WASP made for women’s equality.

In March, 2010, Lillian, together with her entire family, gathered with other WASP and their families  in the US Capitol in Washington, D.C. to receive the Congressional Gold Medal, the highest honor that Congress can award.

On August 4, 2013, just four months shy of her 100th birthday, Lillian died of natural causes at her Burbank home.

Her loving family well remembers this pioneering pilot for “her wry sense of humor and her love of Angels’ baseball,” which kept the family smiling through the years. 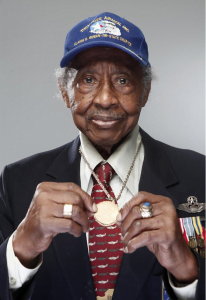