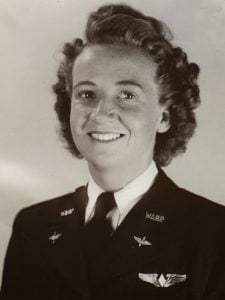 One Sunday afternoon the coyote hunters were giving airplane rides. My brother and I… were the first riders to go up. We were promised a good ride to attract a crowd. We got our money’s worth! ~Lorraine

Born April 16, 1920 on the family homestead in Tampico, Montana. Lorraine Marion Nelson was the daughter of Nels Crist and Mary E. Nelson. She was baptized and confirmed in the Lutheran Faith. She attended Buggy Creek grade school and graduated from Glasgow High School in 1937.

Following high school, Lorraine went to work in a doctor’s office, saving money to go to nursing school. Her primary ambition was to be an airline stewardess, and requirements for stewardesses also included a nursing degree. One Sunday afternoon, she was able to go for her first airplane ride. Immediately, she was hooked on flying. Eventually, she used all the money she had saved to take flying lessons. She earned her private pilot certificate in Billings, Montana on August 6, 1941.

In 1944, Lorraine heard about the training program for women pilots and applied. She passed all the requirements and was accepted into class 44-5. Lorraine and 123 other young women pilots paid their own way to Sweetwater, Texas in December of 1943 to enter training.

After successfully completing seven months of Army Air Forces flight training, Lorraine and 71 of her classmates graduated, earned their silver WASP wings and were given their official Army orders. Lorraine was sent to Pecos Army Air Base in Pecos, Texas, as a maintenance pilot for the twin engine UC-78.

After the WASP were deactivated in December of 1944, Lorraine moved to Seattle, Washington and enrolled in the CAA Aircraft Communication Training course. After passing the course, she was stationed in Gustavus, Alaska as aircraft communicator then transferred to CAA 8th Region, Anchorage, Alaska as a Link trainer instructor, where she worked until January of 1947. From September 1948 to October 1949, she worked as a Link trainer instructor and assistant to the Chief Pilot for Alaska Airlines.

On February 3, 1950 she married James A. Bain, who was in the United States Air Force. Upon their retirement, Jim and Lorraine moved to a small farm outside of Chireno, Texas, where she volunteered for several organizations including a Nacogdoches Hospice; she also taught computer skills for SeniorNet.

In 2010, Lorraine and her fellow WASP were awarded the Congressional Gold Medal, highest civilian honor that Congress can bestow.

God bless all of those whose lives were touched by this remarkable lady pilot.