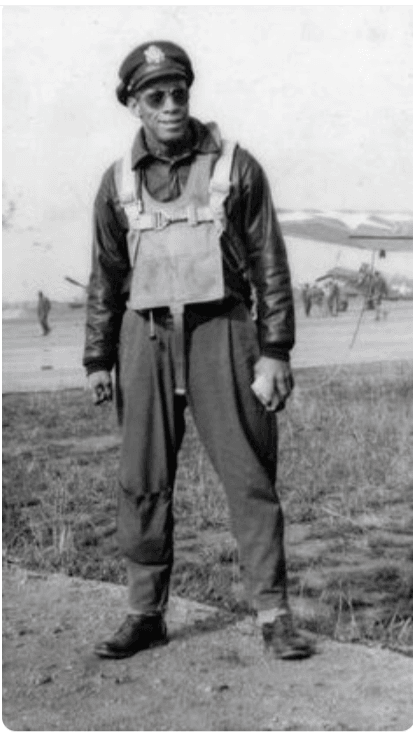 1944 Lowell C. Steward in Naples, Italy while serving with the 100th Fighter Squadron

Born in Los Angeles on Feb. 25, 1919, Lowell Cedric Steward was the son of a railroad porter and a homemaker. Jackie Robinson was his childhood friend.

As a high school student, he was channeled into vocational instead of academic courses because of his race, his son said. A track star and basketball standout, Steward attended Los Angeles Junior College before his admission to Santa Barbara State College, the forerunner of UC Santa Barbara

As captain of Santa Barbara’s basketball team, he led the way to an undefeated season in 1941, when the Gauchos made it to the National Association of Intercollegiate Basketball Championship in Kansas City. Steward, the only black athlete on the team, was barred from competing at the arena and had to persuade his teammates not to walk out in sympathy.

“He had to go across the street and listen to the game on the radio,” his son Lowell Jr, said. “He told me he didn’t ever get over that.”

When Lowell Steward was a student at Santa Barbara State College, he and other members of the school’s basketball team decided to enlist in the Army Air Forces. The others were accepted.

“The powers-that-be seemed to be saying that Negroes couldn’t fly an airplane,” Steward told The Times in 1990. “They didn’t believe that Negroes had the mental capacity to do anything other than menial jobs. I had never touched an airplane, but that so incensed me that I said, ‘Hell, I know I can fly.’ ”

Enlisting in 1942 after receiving his B.A. in business, Steward was one of about 1,000 pilots trained at Tuskegee Army Air Field in Alabama, where the nurses, engineers, cooks, clerks and other personnel were also African American. Designated by government officials at the time as the “Tuskegee Military Experiment,” the effort has since come to be called the “Tuskegee Experience.”

Quarters were provided by the Tuskegee Institute, the school founded by educator Booker T. Washington. In a 1984 interview with Studs Terkel Steward said that organizers of the “experiment” were skeptical about its chances.

“As one of the officers in charge put it, if it doesn’t work out, it’ll be down South and nobody’ll see’em fail anyway,” Steward said. “We’ll give’em a chance. If they succeed, I guess it won’t hurt anything. If they fail, we’ll hush it up and nobody will know about it.”

After receiving segregated training at the Tuskegee Army Air Field, Steward was sent to Italy in 1944 with the 100th Fighter Squadron. From Capodichino Air Base in Naples, Italy he flew a number of missions in Bell P-39 Airacobras and Curtiss P-40 Warhawks. He was subsequently based in Ramitelli Airfield where he flew many more missions in North American P-51 Mustangs. In total, he flew 143 missions.

Steward was ultimately awarded the Distinguished Flying Cross. After being discharged in 1946, he moved to Los Angeles and tried to buy a house, only to be repeatedly denied bank loans because he was black.

“After several encounters like that he said, ‘I need to figure out how to finance my own home.’ That’s when he went to real estate school, his son said.

Steward became one of the first black real estate agents in Los Angeles and went on to a 40-year career in the industry. He helped organize and later served as president of the Los Angeles chapter of Tuskegee Airmen, Inc., a group devoted to preserving the legacy of the fighter pilots.

He also founded a scholarship foundation in the name of the airmen. In 2007, Steward was present at the U.S. Capitol when President George W. Bush presented members of the Tuskegee Airmen with the Congressional Gold Medal.