Born in Denver, Colorado, John William Mosley was the son of a Cripple Creek silver rush settler. He spent his early educational career at Whittier Elementary School, Cole Junior High School, and Manual Training High School. While attending Manual, he played football and wrestled. He was also the valedictorian, and earned the National Merit Scholarship.

After graduation from Colorado State University, John battled discrimination in the military, Mosley had dreams of being a pilot, but was told he had a heart murmur during a flight physical. This he believed to be false. In 1941, an all-Black fighter squadron was formed at Tuskegee Field, Alabama. Mosley wanted to join them after he graduated. But instead he was drafted into a segregated Army Artillery unit stationed in Fort Sill, Oklahoma and not the flying squadron at Tuskegee. This is all despite Mosley paying for and having his private pilot’s license. Mosley found a way to turn “no” into “yes”.  While at Fort Sill, he, his family, and community leaders wrote letters to Congress asking that he be reassigned to the legendary 332nd Fighter Group – also known as the Tuskegee Airmen, the all-Black squadron based in Alabama.

Eventually, these letters did lead to his reassignment. He trained as a bomber pilot, one of the first African Americans to do so.  He chose to return to the states as a civilian in 1946 to earn his master’s degree in Social Work from the University of Denver in 1948. Soon afterwards he returned the service served with distinction during World War II, the Korean War and the Vietnam War, traveling across the Atlantic, escorting other aircraft as they flew over enemy territory. He retired from the Air Force in 1970 attaining the rank of Lieutenant Colonel. 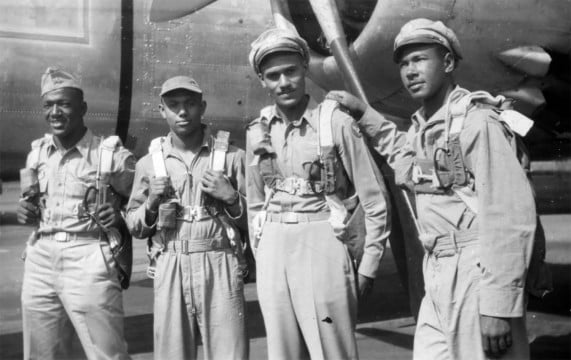 Mosley was a strong activist.  During his time as a Tuskegee Airman, Mosley was fighting for his rights and for the rights of others to serve in the armed forces. He used his motivation and determination to fight for integration in the Armed forces. Directly after World War II, he worked with the Truman administration to draft the policies that would fully integrate the United States Armed Forces. He continued his leadership actions by becoming a spokesperson for black athletes and the Tuskegee Airmen.

John and his wife, Edna were Civil Rights Activists from Denver, Colorado. They were trailblazers who broke the housing barrier in Aurora, Colorado, created institutions to provide financial stability to working families, and supported our school systems to ensure students got a quality education. Mosley served as a special assistant to the undersecretary in the Department of Health and Human Services when he and his wife moved to Aurora Colorado and was transferred to the Lowry Air Force Base. His wife became the first African American lady to become a city councilwoman in Aurora. He worked in a variety of positions including Equal Opportunity Specialist, Staff Director of the Mountain Plains Federal Regional Council and Special Assistant to James Farmer, Assistant Secretary of Administration.

At Colorado State University, many refer to John Mosley as the Jackie Robinson of CSU athletics. In 1998 Mosley was inducted into the CSU Sports Hall of Fame, and in 2009 he was admitted into the Colorado Sports Hall of Fame. Lt. Col. John W. Mosley is Colorado State’s first African American football student-athlete in the record-keeping era. He earned his degree from Colorado State in 1943, and was a member of the original Tuskegee Airmen, flying combat missions over Europe in World War II. These grand accomplishments initiated the conception of his to-be mentoring program. Mosley’s impact on the diversity of athletes has led to a student-athlete mentoring program bearing his namesake.

Through a collaboration between CSU’s Athletics department and the university’s Black/African American Cultural Center, the John Mosley Mentoring Program was established during the 2011-2012 academic year at Colorado State University. The goals of the mentoring program are “to reduce the percentage of academic probation rates, to increase retention rates to matriculation, [and] expose [student-athletes] to positive African-American role models who have been through the rigors of academic achievement as a student-athlete and who have earned their degree”. While mentorship remains an essential component to the success of the program, the program underwent a name change in 2014, becoming the John Mosley Leadership Program (JMLP). The four guiding principles of the JMLP are a) self-exploration. b) community engagement, c) transitional growth and leadership, and d) mentorship.

Following his retirement in 1970, Mosley continued his leadership actions by becoming a spokesperson for black athletes and the Tuskegee Airmen. Mosley received numerous awards such as the Anti-Defamation League Torch of Liberty award, an honorary doctorate from CSU as well as the Congressional Gold Medal by then President Bush.

Much like the legacy of Jackie Robinson, Colorado State University & the memory of CSU Ram Lt. Col. John Mosley continue to inspire student-athletes and future Rams.

During the second World War, John W. Mosley tried to join the air camp of the United States Tuskegee Airmen is not just a flight school to learn how to fly but also a great motivator for anybody with a dream that is never too big. Mosley and his flight crew gave many motivational tendencies to young minorities to inspire them to go out and be who they want to be no matter the fight within the fight.

After years of serving the community, friends and community members raised money to present to the Mosley’s to allow them to go on vacation abroad to enjoy themselves. The community raised thousands of dollars to honor and show thanks to the Mosley’s philanthropy throughout the years. The Mosley’s instead had a different plan for this money: they agreed to accept the money raised, if only they could start a scholarship fund with it, instead of a vacation for themselves. Since its start in 2002 this scholarship fund has helped numerous African American students from the Denver-Metro area, equaling in $28,000 worth of scholarship dollars given to the recipients. The requirements for this scholarship include: one must be African American, have a desire to further their education in a University, College or another accredited post-secondary school and must have accumulated a GPA of 2.5 of higher. This scholarship fund looks for students who take charge of their lives to better them, such as maintaining good grades and having leadership roles, once the finalist is accepted the scholarship board will then hold interviews to ensure that the Mosley scholarship is awarded to the perfect candidate to honor the Mosley’s. This scholarship fund is now the largest and oldest community fund in the entire state of Colorado. Following his death, the Mosley family asked the public to please not send the family flowers, but instead donate a dollar to his scholarship fund to honor one of his life goals to help African American students achieve their full potential in post-secondary education.

Due to the impact that John W. Mosley as well as his wife Edna had in the Aurora Community, Aurora’s Mayor, Steve Hogan, decided to dedicate a school to the individuals. The school, Edna and John W. Mosley P-8, opened on October 1, 2015 near Airport Boulevard and 2nd Avenue in Aurora, Colorado. Currently, it is occupying more than 900 students.

John-Claude Futrell, the eldest grandson of John and Edna Mosley is currently running a media campaign to ensure that Stapleton Airfield in Denver, Colorado is renamed, “Mosley Park”.

Benjamin Stapleton, former Mayor of Denver, also served as a member of the Ku Klux Klan from 1933-1935. Over the past five years, activists associated with Black Lives Matter 5280 and the “Rename Stapleton for All” group pushed hard for a name change.  With the George Floyd protests shifting the historical narrative on racism in America, names with racist affiliations are being dumped by the wayside. On June 16, 2020, community delegates voted unanimously in support of a name change, clearing the way for the Stapleton neighborhood to become a thing of the past. Stapleton, as it once was an airport, couldn’t be more deserving of the Mosley name. Naming this place after a local African American hero is a small step towards reconciliation and understanding.

Researched and submitted by Deidre McGee