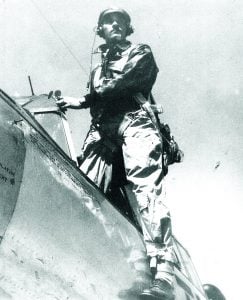 William Fuller was born in Detroit in 1924, he registered for draft at age 18 and received induction papers but in the meantime had heard of Tuskegee program so took a special intelligence test and got a high grade. When he was drafted, he took those test results to the draft board. He was told by draft board that the Army Air Corps could have him.

He was sent to basic training at Keesler Air Field in Mississippi. It was his first exposure to the segregationist policies of the Army. When a superior officer called him “boy,” Mr. Fuller took exception and as a result spent the first ten days there washing pots and pans for 10 hours/day as punishment.

After finishing his training, he was sent overseas to Italy. Although the military initially ordered Tuskegee pilots to do patrol or search-and-destroy missions, they later were responsible for bomber escorts and other mission types, Fuller explained.

One of his most memorable flight missions involved outmaneuvering a German Messerschmitt Bf 109 fighter plane that was on his tail in Italy. Fuller managed to “hit the deck” and fly his P-51 fighter plane at around 10 feet above treetop level as he flew toward the side of a mountain.

“I pulled up at the last minute,” he said. “My tail wheel hit a tree. I could feel the thump. And he (the enemy pilot) didn’t make it.”

When Fuller wasn’t fighting the Axis powers, the lieutenant was witnessing the reality of racism in the U.S. military. He explained that the Tuskegee program was considered an experiment, and many people doubted that it would succeed.

He recalls some of the incidents of racial division that he saw in his estimated three years in the service.

Upon leaving the service, Fuller discovered that he didn’t have any civilian clothes to wear, so he wore his uniform for a couple of weeks. He soon wandered into a neighborhood church dance, where he met his future wife and asked her to dance. The two married in 1948 and have been together for almost 64 years.

“The uniform helped the impression I made,” he said. “I walked her home that night.”

Mr. Fuller attended Wayne State University. After the war, he went to work for Chrysler Corporation and held a management position in the training department.  One of his jobs there was to work with disadvantaged kids, to prepare them for life in the working world.  His team would start at the beginning – helping the kids choose the clothes to wear the following day, how to work an alarm clock, how to be on time, etc.  Many of these young people ended up working at Chrysler but some did not meet the standards so Chrysler helped to place them outside of the company.

Mr. Fuller said, “The days of the desirable unskilled jobs are gone. The corporate job training programs are pretty much gone, too. A solid education is key to success now, along with good work habits. Work habits are something you have to learn.  Only some of the Tuskegee Airmen had exposure to airplanes before coming to train at Tuskegee.  The rest of us had to learn everything there was to know about airplanes and develop the discipline to fly them or we would wash out.  I appreciate what the CAF Red Tail Squadron is doing with our story – helping today’s youth see that it is possible to meet challenges head on and by working through them and never giving up, move forward toward a goal.”

On March 7, 2012 the Oakland County Board of Commissioners in Pontiac, MI presented a Proclamation plaque honoring Lt William Fuller for his service to our country.

See the photo and more information in the Virtual Museum!

Sources:
Based on an interview with Mr. Fuller, Oct. 22, 2012 with CAF Red Tail Squadron