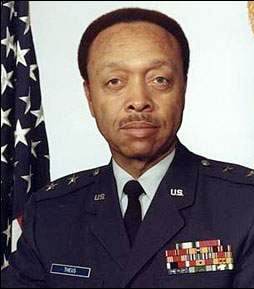 Major General Lucius Theus was the first African-American combat support officer to be promoted General and one of only three members of the World War II 332nd Fighter Group, known as the Tuskegee Airmen, to receive that rank.

General Theus was born in Madison County, Tenn., in 1922, and graduated from Community High School in Blue Island, Ill. He has a bachelor of science degree from the University of Maryland, 1956, a master’s degree in business administration from The George Washington University, 1957, and is a graduate of the Harvard Advanced Management Program, Harvard University Graduate School of Business Administration, 1969. During his Air Force career, General Theus attended the Statistical Control Officers School at Lowry Air Force Base, Colo., in 1948, and the Armed Forces Staff College in Norfolk, Va., in 1960. He was an honor graduate of the Industrial College of the Armed Forces correspondence course in 1964 and in 1966 he graduated with distinction from the Air War College at Maxwell Air Force Base, Ala.

He then entered Officer Candidate School, graduating second in his class with a commission as second lieutenant in January 1946. Following a one-year tour of duty as squadron adjutant at Tuskegee Army Air Field, Ala., General Theus went to Lockbourne Air Force Base, Ohio, as base statistical control officer. In August 1949 he was transferred to Erding Air Depot, Germany, where he served as the analysis and presentation officer, and later commander of the Statistical Control Flight and depot statistical control officer.

General Theus was assigned in August 1952 to the Office of the Deputy Chief of Staff, Comptroller, Headquarters U.S. Air Force, Washington, D.C., where he was chief of the Materiel Logistics Statistics Branch.

Upon his return to the United States in July 1967, General Theus was reassigned to Headquarters U.S. Air Force, Office of the Comptroller of the Air Force, as a data automation staff officer, in the Directorate of Data Automation. He served initially as chief, Technology and Standards Branch; then chief, Plans, Policy and Technology Division; and later chief, Program Management Division.

During that assignment, General Theus also performed additional duty as chairman of the Inter-Service Task Force on Education in Race Relations, Office of the Secretary of Defense. The recommendations of the task force led to establishment of the Defense Race Relations Institute and the Department of Defense-wide education program in race relations. In 1968 he attended the Department of Defense Computer Institute.

In July 1971 General Theus was assigned to the position of director of management analysis, Office of the Comptroller of the Air Force. In June 1972 he was appointed special assistant for social actions, Directorate of Personnel Plans, Deputy Chief of Staff, Personnel, Headquarters U.S. Air Force.