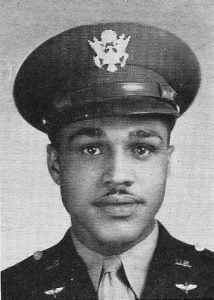 On June 16, 1943 2nd Lt. Luther L. Blakeney was a weatherman flying as a passenger making weather observations when a rapidly forming fog formed all the way down to the surface of Lake Huron in a Vultee BT13-A serial number 42-42926 being flown by 2nd Lt. Nathaniel Hill. Lt Hill had earned his license to fly visual conditions, and was working on his hours of flying out of Oscoda, Michigan to earn an instrument rating. Nathaniel Hill as well. Lt. Nathaniel Hill are buried in Arlington.

During the middle years of World War II, Michigan was home to several African American Army Air Corps units, including graduates of the Tuskegee pilot training program. The pilots received advanced training, simulating aerial combat and bombing exercises over Lake Huron. The relative safety of mid-Western America, along with weather and geographical conditions that approximated what aviators could expect to encounter in Europe, encouraged the military to use airfields at Selfridge northeast of Detroit and at Camp Skeel near Oscoda.

Upon completing training in Michigan, many Tuskegee airmen immediately deployed to combat or support missions in Italy, North Africa, and the Mediterranean. In May 1944, the Army transferred all remaining Tuskegee fighter pilots from Michigan to South Carolina, essentially ending the Tuskegee presence in Michigan. Almost immediately, the vacated bases at Selfridge and Oscoda were populated with Free French fighter pilots training in America while their homeland was occupied by Nazi Germany.

The potential for Tuskegee airmen-related archaeological sites worldwide is low. Outside of Tuskegee Army Airfield itself, very few places where Tuskegee airmen trained, fought, or occupied are conducive for archaeological research. Although many Tuskegee aircraft were involved in accidents that resulted in loss of the pilot and air frame, the material remains were usually recovered, leaving little if any trace of the resultant disaster.

Aircraft that went missing are a notable exception. Two airplanes, both Bell P-39Q Airacobras, have recently been discovered in Michigan waters. Both were lost in training accidents and both were hidden beneath the water for many decades. Lt. Frank Moody was killed when his airplane crashed north of Port Huron on April 11, 1944, and Lt. Nathaniel Rayburg was killed when his Airacobra crashed in Lake St. Clair on December 12, 1943.

The bodies of all of the pilots, with the exception of 2nd Lt. William E. Hill, have been recovered.