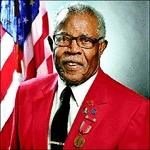 Major L. Anderson II was born March 5, 1925 in Jacksonville, Florida and graduated high school with the class of 1942. He was inducted into the Army Air Corp (U.S. Air Force) in 1943. Trained as a sheet metal worker, he was assigned as support personnel to the Ground Support Group of the 477th Bomber Group, 616th Squadron based at Godman Field, Kentucky. His assignment was repairing bullet-hole punctures and damages to the B-25 Bomber Aircraft. In March of 1946, Major Anderson was honorably discharged. He attended Howard University in Washington, D.C. from 1946-1949 majoring in Mechanical Engineering. In 1973, he received a Bachelor’s of Business Administration (B.B.A.) degree from Federal City College, currently known as the University of the District of Columbia (UDC).

Major L. Anderson was drafted at the age of 18 in 1943 and entered the Army Air Corps. He received basic training at Keesler Air Field, Biloxi, MS and trained as an aircraft sheet metal worker at The Air Force Technical School, Chanute Field, IL. His assignment was to repair aircraft bodies, bullet hole punctures and damage to B-25 bomber aircraft.

He witnessed one of the most indelible scenes of his life. He and the other enlisted members of the 477th Bomber Group had just completed a parade at Godman Field, Kentucky, as the units’ officers came marching into view, the medals pinned to their dress uniforms glinting in the sun. Among them was the first black military officer the private had ever seen.

“It was the most spectacular thing, how spiffy, how amazingly good those officers looked in their pretty uniforms with polished insignias,” he said in an interview.

After 30 months of service, the War ended and Major L. Anderson, III was honorably discharged “at the convenience of the government.”

Blacks had mostly non-combat roles in the military until Congress passed Public Law 18 in 1938, giving hope to those who craved more with the creation of training for the first African-American pilots. About 1,000 black pilots were trained in Tuskegee, Alabama, and went on to protect B-17 and B-24 bombers from the Luftwaffe by escorting them into enemy territory in Germany and central Europe.

Tuskegee Airmen also include another 18,000 blacks who served as navigators, crew chiefs, nurses, mechanics and other support staff for the aviation mission. Anderson was a sheet metal worker.

“I repaired bullet-hole punches in the B-25 bomber. The hardest part was dealing with the noise of the engines. I used to put cotton balls in my ears to buffer the loud sound,” he said.

Anderson said he didn’t understand the significance of the mission until years after he’d taken an honorable discharge to attend Howard University in Washington, D.C. He was often asked how he feels about having served a country that treated him poorly. Despite discrimination and segregation in America, it’s still the greatest country in the world, he told them.

He attended Howard University until his marriage in June of 1948. He later earned a degree in Business Administration from Federal City College in Washington, DC. Major L. Anderson, III was an employee of the US Postal Inspection service until his retirement in 1984.

Learn about an amazing academy whose namesake is the

Empowering the next generation of Aircraft Maintenance Excellence

MATAMA is dedicated to preparing students with the professional aviation maintenance skills necessary to address the shortage of certified Aviation Maintenance Technicians (AMTs) trained to support the global aerospace industry.

The Academy is founded on the principle of creating value. We believe the Academy creates value for our graduates and their ultimate employers by implementing a program of study that trains, certifies, and provides substantial on-the-job experience for every student. All training is local, providing the region with the ability to meet local employment demands and promote local interest in aviation and related careers. Graduates will be certified on both Boeing and Airbus aircraft, adding immediate value for potential employers.