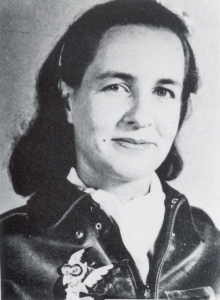 Her first job was as a secretary to her aunt, Theresa Helburn, director of the Theatre Guild in NYC. In 1942-43 she continued to work for the Theatre Guild as casting director and stage manager, ultimately being one of the assistant managers of “OKLAHOMA!” when it opened in 1943.

She left the theatre to joins the Womens Airforce Service Pilots in 1943. Upon graduation from the 6-mnth cadet training course, she was assigned to the Training Command, and served as a tow pilot for advanced glider pilot training. Later she served as commanding officer of the WASP at Eagle Pass AAF, where the women pilots towed targets for the advanced gunnery school for pilots until the WASP program was terminated in December 1944. After that she worked as a sales pilot for Republican Aviation in Farmingdale, NY, a flying reporter for Yankee Pilot, and an accident analyst for Cornell Medical School’s Crash Injury Research program.

In 1947 she married Eric Kocher, who served in the Foreign Service for 23 years. During the course of tours in Brussels, Belgium; Kuala Lumpur, Malaya; Amman, Jordan; and Belgrade, Yogoslavia, the Kochers had 3 sons and a daughter. Ms. Kocher remained active as a string correspondent for McGraw-Hill World News until 1955. While in Kuala Lumpur, she compiled the first guidebook to that city, “The Traveller’s Guide to Kuala Lumpur”.

From 1956 to 1959, while Mr. Kocher was stationed in Washington, Ms. Kocher worked as technical editor, later Chief Editor, for Vitro Engineering Company’s Washington office. Upon returning from Belgrade in 1965, when Mr. Kocher was assigned as Diplomat in Residence at the University of Texas in Austin, Ms. Kocher started graduate work in Linguistics, completing her MA degree at American University in Washington in 1969. From 1967 to 1969 she also worked at the Center for Applied Linguistics in Washington. From 1970-72 she taught linguistics at Adelphi University in Garden City, and in 1972 she initiated a course “Black English for the Classroom Teacher” at Queens College. During years 1972-74, she acted a linguistics consultant to educational projects at New York University, gave papers at linguistic conferences, and published bibliographies in Black English.

Ms. Kocher ran for the NY State Assembly in 1974 – unsuccessfully – and became involved in the Citizens Advisory Committee (CAC) for the New York City 208 water Quality Management program. From 1976-1980, she worked for the City as staff for the CAC. And then worked from 1980-81 for a consultant who specialized in public participation. In 1982 and 1983, she was employed by the Energy Center of the New York Institute of Technology to organize conferences on both coasts and write the “Energy Information Guidance Manual”. Thereafter she ran her own consulting business, and with co-author wrote the 200-page manual on waste management in New York area, “The World of Waste”, published by the League of Women Voters of the Tri-State Metropolitan Region in 1988.

From the time the Kochers moved to New York on 1970, Ms. Kocher was active in the League of Women Voters of New York City, being elected Chairperson of its North Shore Branch in 1973. From 1975 she concentrated her efforts on environmental protection, becoming Co-chair of the City League’s Environmental Committee in 1988, and Chairperson on 1990. Mayor Dinkins appointed her to the Citywide Recycling Advisory Board in 1990. She was also involved with the New York – New Jersey Harbor Estuary Program, the Long Island Sound Study, and the Rene Dubos Center for Human Environments.