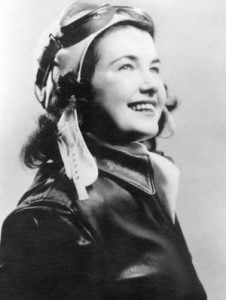 “I learned to fly to be able to join the WASP…and had to stand up really tall to qualify for the height measurement of 5′ 2 ½.”
~Margaret Phelan Taylor

The daughter of Budd and Mary Phelan, Margaret was born in a pioneer log cabin on her parents’ farm outside Emmetsburg, Iowa, on September 20, 1923.

At a very early age, Margaret taught herself to read. When she had read all of the books on the children ‘s shelf at the local public library, she talked her mother into surreptitiously checking out adult fiction for her.

After graduating from St. Mary’s Academy in Emmetsburg in 1940, she attended Clarke College in Dubuque, Iowa, for two years, before going to Burbank, California to work as a draftsman for Vega Aircraft Corporation, a defense plant.

She was 19, and was ready for adventure in 1943 when a Life magazine cover story on the female pilots caught her eye. Her brother was training to be a pilot with the Army. Why not her? She asked her father to lend her money for a pilot’s license — $500, a huge amount then.

“I told him I had to do it,” Taylor says. “And so he let me have the money. I don’t think I ever did pay it back to him either.”

But there was a problem. She was half an inch shorter than the 5-foot-2-inch requirement.

“I just stood on my tiptoes,” she says. When she arrived at Avenger Field in Sweetwater, Texas, where most of the WASP were trained, “Well, there were a lot of other short ones just like me, and we laughed about how we got in.”

Short, tall, slim, wide, they all came in knowing how to fly. The military trained male pilots from scratch, but not the female civilian volunteers.

“They didn’t want to bring in a bunch of girls who didn’t know how to fly an airplane,” says Katherine Sharp Landdeck, associate professor of history at Texas Woman’s University, who’s writing a book about the WASP, tentatively called Against Prevailing Winds: The Women Airforce Service Pilots and American Society. “So you have women who are getting out of high school and taking every dime they had to learn how to fly so they could be a WASP.”

After completing 7 months of AAF flight training, Margaret graduated and was sent to Stockton Air Force Base, California. She flew as an engineering text pilot, checking out overhauled twin-engine UC 78’s so that they passed inspections for the cadets to fly. She also ferried war weary planes to Texas and to the Arizona desert.

Once when Taylor was ferrying an aircraft cross-country, somewhere between Arizona and California, she saw smoke in the cockpit. Taylor was trained to bail out if anything went wrong. “But the parachutes were way too big. They weren’t fitted to us,” she says. “The force of that air and that speed and everything, why that just rips stuff off you. You’d slip right out.”

So her plane was smoking and Taylor faced a defining moment.

Was she scared? “No. I was never scared. My husband used to say, ‘It’s pretty hard to scare you.’ ”

The plane’s problem turned out to be a burned-out instrument.

The WASP were disbanded in December of 1944, and in February of 1945, Margaret married Jim Taylor, an Army Air Corps pilot she had met at Stockton Field.

In 2010, Margaret, along with other members of the WASP were invited to Washington, D. C. and awarded the Congressional Gold Medal for their service during World War II.

Taylor was excited about the medal. She served her country out of loyalty, she said. That was certainly part of it. But the other reason? “I did it for the fun. I was a young girl and everybody had left and it was wartime. You didn’t want to get stuck in a hole in Iowa; you wanted to see what was going on.”