Margaret was introduced to the lure of aviation at an early age. At age seven, she took a flight with a barnstormer, and by 1940, she had her pilot license in hand. Margaret never intended to be a pilot. She wanted to be a stewardess, or flight attendant as they’re currently called. She wondered what would happen if the pilot needed help or became ill, so decided to do what she could to have some skills in case that happened. She quickly found she loved to fly, and another pilot was born. She went on to serve as a WASP, “There was a job to be done and they had asked me to do it,” Ringenberg said. “What an honor to be able to serve my country and to fly.”

She went on to receive her Flight Instructor certificate in March 1945 and promptly had no students. “Who wants to ride with a girl pilot?” she noted. While she waited for students, she would mow the lawn, repair Cub fabric, answer the phones, and even send letters. “I was at the airport and I was happy to do it. Eventually I started picking up students, and pretty soon my schedule got full.”

Margaret announced the war’s end in 1945 to Fort Wayne residents by dropping 56,000 leaflets proclaiming “Japan Surrenders!” from a plane flying over downtown streets. Both newspapers in the city were on strike, so a radio station hired her to make the historic “news drop.”

She began racing airplanes in the 1950s. She raced in every Powder Puff Derby from 1957 to 1977, every Air Race Classic since 1977, the Grand Prix and the Denver Mile High and many others, garnering over 150 trophies for her accomplishments. She completed the Round-the-World Air Race in 1994 at age 72, and in March 2001 at the age of 79 she flew in a race from London to Sydney.

Roger Myers, Greater Fort Wayne Aviation Museum board member and WWII bombardier, worked closely with Margaret for many years. He said there were two rooms in her house that were floor-to-ceiling with trophies and ribbons she’d earned over the years. Yet Margaret was never one to brag, always passing herself off as another veteran who did what they could during the war. In July 2002, she was honored as one of Indiana’s six Living Legends. Last summer, she was honored as a flying legend by the Gathering of the Eagles at Maxwell-Gunter Air Force Base in Alabama.

In 1999, she received the NAA Elder Statesman in Aviation Award in a presentation ceremony in Washington, DC.

Margaret is listed in Tom Brokaw’s book, “The Greatest Generation,” taking up an entire chapter. She gave Tom a flight lesson when he interviewed her. Brokaw said Monday he was heartbroken to hear of her passing. “Margaret was one of my favorites,” he said. Margaret later spoke to Brokaw — even giving him a flight lesson — which was taped and ended up as a news clip. Margaret remembers the experience, by noting that, “I got three minutes on the Nightly News — unbelievable!”

Margaret was among four inductees into the WAI Pioneer Hall of Fame in 2008. “It is a great honor,”she said. “My family is very, very happy about it.” She was nominated by one of her local area 99’s, which thrilled her, since it was a friend. 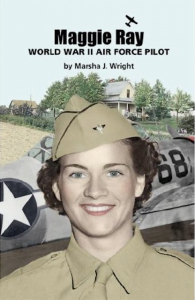 Her daughter wrote a book about her mom, “Maggie Ray, World War II Air Force Pilot.” Margaret wrote her own book in 1998 with Jane Roth titled, “Girls Can’t Be Pilots.”

When she spoke to a group of NASA employees a few years ago, they offered to let her try the Space Shuttle simulator. Her granddaughter, who accompanied her on the trip, said the employees said almost all pilots who were trained on it crashed a few times until they got the hang of it. Each time she tried it, Margaret landed perfectly.

ANN stringer Dave Slosson remembers speaking with Ringenberg from the EAA tower at Oshkosh, WI. “I met Margaret only once, but talked to her many times via radio, pilot to controller… She was a true American hero, and just as down to earth as the land she and her husband farmed. It is so appropriate she passed away in Oshkosh.

“You’re flying now, Margaret, and we’ll see you on the other side.”