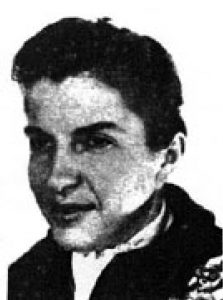 Marian began her training to become a WASP at Avenger Field, Sweetwater, Texas on July 10, 1943 and graduated December 17, 1943.

Her parents, John and Nelle, were at their daughter’s graduation, proudly pinning on Marian’s silver wings. After the ceremony, they returned to Aberdeen, Idaho, where Marian had a week to relax in her girlhood home.

Early in the morning, Friday, February 18, Marian checked out a parachute, walked to the flight line, and climbed into a BT-13. She fired up the engine, completed her preflight check, then taxied out to the runway. Sources say she was flying to Fresno, California, and perhaps that was her ultimate destination, but Fresno is barely 30 air miles from LeMoore, hardly enough time in the air to fully checkout a previously damaged or faulty airplane. Add the fact that Marian’s BT-13 finally wound up nearly 125 miles northwest away from Fresno, in the eastern foothills of San Jose, California, and a simple flight to Fresno just doesn’t make any sense. If Fresno was her ultimate destination, she was first flying a longer cross-country flight.

Twenty-six-year-old Marian crashed just a block away from where her Uncle Otto Toevs lived in a San Jose, California neighborhood. She had visited with Otto and his wife just two weeks before and it was Uncle Otto who ultimately identified her body for authorities.

“The motor was still going when it hit,” Anthony Gullo said. He had been only 75 feet from the crash. Other eyewitnesses said Marian’s plane had been flying very low and circling, as if she were looking for a place to land. “I was the second one to reach the spot,” Gullo said. “The girl’s body was thrown clear of the wreckage. She was blonde and looked about 20 years old. Her face was bloody.”

At about 11 in the morning, the plane had suddenly nosed up and then plunged to earth. “We watched it disappear behind some houses,” one witness said, “then we heard an awful noise and the crash.”

On March 10, 2010 when Congress honored the female pilots of World War II by awarding them bronze replicas of the Congressional Gold Medal, one posthumous honoree was Marian Toevs.

The ceremony in the nation’s capital revived her memory for her family.

“She was very athletic,” said younger cousin Margie Chally, who lives in Davis and grew up with Marian in Idaho. “She was quite involved in school sports in Aberdeen. She was on the basketball team, she was a swimmer and she played tennis.”

After teachers college, Marian taught in White Salmon, Washington.”She got the bug that she wanted to fly,” Chally said. “She was a pretty determined woman.”

Sadly, on February 18, 1944 the BT-13 she was flying crashed near the home of her aunt and uncle near San Jose.

Her aunt “went out there and held her in her arms when she breathed her last,” Chally said. Chally said she doesn’t know what caused the crash, but family members were told that BT-13 aircraft were difficult to control. Marian was one of only two WASP trained to fly the aircraft, a family member said.

“Her death was incredibly hard for my grandmother,” said nephew Gordon Toevs, 58, of Washington, D.C., born after the war. “She was the only daughter.”

Gordon and a cousin attended Wednesday’s ceremony and received the gold medal on behalf of the Toevs family. The invitation, from Speaker of the House Nancy Pelosi, arrived in Aberdeen.

Nephew Ritchey Toevs, 55, a potato farmer in Aberdeen, said Marian taught in rural Idaho, and he has met people who were her students.

“They all mention how fun she was, how much they enjoyed her,” he said.

Ritchey gave his youngest daughter the middle name Marian in honor of the aunt he never knew.

The gold medal has given the family a new appreciation for her, he said: “Even I, 67 years later, now feel an unexpected bond to Marian.”