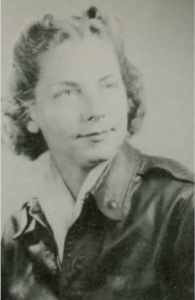 On April 10, barely 24 hours after WASP Evelyn Sharp’s funeral in Ord, Nebraska, Marie Ethel Sharon, (43-W-4) took off from Rosecrans Army Airfield in St. Joseph, Missouri with her instructor, Lt. Hinton Daniel. This was a navigational training flight in a B-25 Mitchell bomber. The Midwest weather that had delayed Evelyn Sharp on her flight across the country had gotten worse. As Marie maneuvered their bomber for over an hour in a thick overcast, passing from point to point and into Nebraska, pelting rain began smashing against the aircraft’s skin. The B-25 began to rattle and shudder violently against “extremely hard winds,” gusting at 45 mph. Lt. Daniel and Marie frantically fought to maintain altitude and control. Suddenly, the nose wheel door began to twist with a screeching metallic sound. The hinges gave way in the wind and the door flew away, slamming into the right-side motor. Sixty-five miles south of Omaha, there was smoke, the engine failed, and the bomber lunged into a nose first dive. It shattered in pieces as it hit the ground and buried itself deep into a field on the farm of John Murphy near Tecumseh, Nebraska.

Marie Ethel Sharon is one of the fallen 38 WASP, who were not recognized as military personnel, and so she did not receive the custom benefits of a military funeral. She could not be buried in one of our national military cemeteries, there was no flag draped over her coffin, no Government headstone, and certainly no custom military aid given to her family for her burial expenses. Often in these cases, fellow WASP would personally contribute to the expenses of the coffin being sent home, and to the funeral expenses.