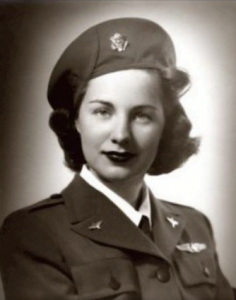 Marie Michell was born May 23, 1924, in Detroit, Michigan and by 1933 she and her brother Roy lived with their mother and stepfather in Chicago.

To Marie, flying was just a natural thing,” said Roy. “She loved it.” Marie’s inspiration for flying was Jack Hayward, a young man who went to school with Roy. “Jack was already a pilot while still in high school,” Roy said. “Marie decided to impress him by becoming a pilot, too.” Marie’s skill as a pilot got her a job in Chicago as a Link flying instructor at the American Airlines Pilot Training School. On September 6, 1943, she began training at Avenger Field. That same month, Jack Hayward, now a Navy pilot, died when his airplane crashed.

After graduation from Avenger in March 1944, Marie reported to the 5th Ferrying Group at Love Field in Dallas. There, Marie met an Army flight surgeon, Captain Hampton Robinson.

In late September, Marie transferred to Victorville Army Air Field in the California desert. Capt. Robinson was already at his new assignment, Reno Army Airfield. Somehow, the couple found enough time together that they decided to marry. In a ceremony kept secret from relatives, Hampton and Marie tied the knot.

In the afternoon of October 2, 1944, at about 1:15, 20-year-old Marie was taking off as copilot in a B-25 Mitchell bomber. Earlier that morning her roommate, originally scheduled to fly that day, awoke with a toothache and without hesitation Marie agreed to take the roommate’s place. With her in the plane were the pilot, Lieutenant George Rosado, and the crew chief, Staff Sergeant Gordon Walker. Their mission was listed as “day transition” training for copilot Michell-Robinson.

Less than a half hour after takeoff, the bomber had crashed and Marie and the crew were all dead. Two eyewitnesses flying nearby in Bell P-39’s stated that they saw the B-25D stall and then enter a spin from which there was no recovery. #41-30114 was observed to crash and burn some twenty-five miles west of Victorville AAB.

After the bodies were recovered, WASP Elizabeth MacKethan Magid (44-W-2) was at Cochran Field, in Georgia, waiting to catch a hop on a transport plane to Michigan so she could be at Marie’s funeral. She began writing a poem.

Elizabeth said the words to her poem came easily; almost as if someone were dictating them to her. When she was done, she had written “Celestial Flight,” a tribute to Marie Robinson.

She is not dead —
but only flying higher, higher than she’s flown before
And earthly limitations will hinder her no more.

There is no service ceiling, or any fuel range,
And there is no anoxia, or need for engine change.

Thank God that now her flight can be to heights her eyes had scanned,
Where she can race with comets, and buzz the rainbow’s span.

For she is universal like courage, love and hope,
and all free, sweet emotions of vast and Godly scope.
And understand a pilot’s fate is not the thing she fears,
But rather sadness left behind. Your heartbreak and your tears.

So all you loved ones, dry your eyes,
Yes, it is wrong that you should grieve,
For she would love your courage more,
And she would want you to believe

She is not dead.
You should have known
That she is only flying higher,
Higher than she’s ever flown.

This aircraft wreck was more recently visited and documented by aviation archaeologist and wreck finder G Pat Macha of www.aircraftwrecks.com

When we read a name that’s one thing, but when we see the person’s picture then the loss becomes more personal. Artifacts from February 2005 crash site visitation. Marie Michell Robinson lost her life in service to our Nation on 10/2/44. We remember her and her crewmates, and we honor their sacrifice. 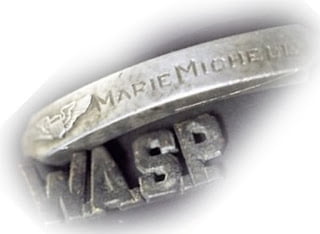 WASP lapel insignia of Marie Michell Robinson lying in the surface sand undisturbed for more than half a century.