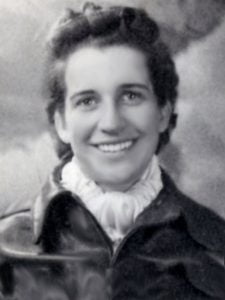 In 1943, DeGregorio was in the first contingent of the Women Airforce Service Pilots. The WASP took on the duty of flying military aircraft on stateside missions, freeing male pilots for combat overseas.

Born in Englewood, N.J., DeGregorio was the widow of Felice DeGregorio, longtime proprietor of Felix’s Italian restaurant in the Village. They were married in 1966. Felice was the informal “mayor” of the block of W. 13th St. between Sixth and Seventh Aves., and Marion joined him as the neighborhood’s unofficial “first lady.”

Restaurants on the street would come and go, but Felix’s — established by Felice’s father in 1937 — endured as an unfancy purveyor of red sauce and good cheer. Felice retired in 1983, and he and Marion spent the years until his death in 1994 traveling in the United States and Europe.

The WASP were organized by Jacqueline Cochran, a celebrated aviatrix in the 1930s and ’40s. One of the first women to sign up was Marion Mackey, a 5-foot-2 secretary with a private pilot’s license she had acquired in her spare time. Along with three dozen other volunteers, she joined Cochran at an Army air base in Houston, Tex.

More than a thousand other women would follow that pioneering first class, nicknamed “The Guinea Pigs.” Like Marion, who was stationed at New Castle Army Air Base in Delaware, they flew all types of military aircraft from factory to air base, or from base to base. The WASP also flew cargo and a variety of training missions.

Opportunities for women pilots were few after the war. Marion spent the next several years flying charters and giving flight instruction in Florida and Maine, but finally gave up and resumed her secretarial career in New York.

She spent her last years in her beloved Greenwich Village. A voracious reader, she could recite dozens of poems from memory well into her 90s. “The Lake Isle of Innisfree” by William Butler Yeats was a particular favorite.