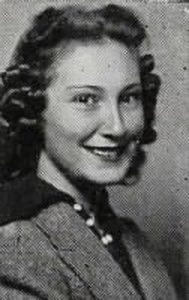 Born Marjorie Laverne Davis, December 20, 1922, in Hollywood, California, Margie was the second of five children and the first daughter of Clinton and Margaret Davis.

When Margie had graduated from Hollywood High School in 1941, Stuttgart, Arkansas was probably one of the last places she expected to be visiting. She told her high school yearbook committee that she planned to be a teacher. That fall, she entered UCLA in pursuit of a physical education major, but just two weeks before her 19th birthday, the Japanese bombed Pearl Harbor and Margie’s education plans turned toward aviation. Without telling her parents, she left UCLA in 1943 and headed for Sparks, Nevada, just south of Reno. There, she shared a room and expenses with another woman and learned to fly.

She entered training to become a WASP at Avenger field, Sweetwater, Texas in June, 1944. Just 23 days before her graduation, October 16, 1944, Margie was in advanced training, flying solo on a 2,000-mile cross-country flight from Avenger Field in an AT-6 Texan. The destination for the flight of 13 aircraft was Courtland Army Airfield in north central Alabama. Their first refueling stop was the Stuttgart, Arkansas Army Airfield, where the women and Lieutenant Leonard Gonye, their instructor and flight leader, took a break and ate a meal before flying on.

After they finished eating, Margie and the rest of the flight climbed into their planes and took off. At about 7:30 in the evening, Margie was about 90 miles from Courtland Field in Alabama and just over the Tennessee state line, a few miles south of Walnut, Mississippi. The sky was clear and temperatures were slowly dropping into the upper 40s. Except for the stars sparkling in a cloudless sky, it was dark. Flying by instruments, Margie was lost and already overdue at Courtland Field.

Investigators found one witness who said Margie’s plane had been flying in circles for nearly an hour. Apparently, she had tried to land in a field, but on her approach, she snagged a power line, snapping it in two. When her wheels touched down the impact forced her head against the edge of the cockpit canopy—hard enough to kill her. The plane slid to a stop just a few feet from an irrigation ditch.

Margie was the last WASP to die in training.