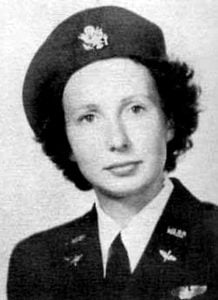 Marjorie “Margie” Doris Edwards was born in Anaheim, California, September 30, 1918, the first child of Frederick (Fred) and Marie Edwards. Marjorie was very musical, and took piano lessons, and learned to play very well. The organist at the Methodist Church she attended gave her some instruction on the pipe organ, and she played the organ for church for the first time at age 12.

Marjorie had the natural skills and temperament of a teacher, and upon graduation from Anaheim Union High School in 1936, enrolled in Santa Barbara State Teachers College, which years later became University of California at Santa Barbara. She graduated with a Bachelor of Arts degree in 1940, the first of her family to attend or graduate from college. It was in college that she had her first experience of flying. Her boyfriend had a plane and was a licensed pilot, and much to the displeasure of her parents she went flying with him several times and loved it.

World War II had already started in Europe, and letters from England told how the war was affecting the family there. Her cousins were already in the British Army and the Royal Air Force. So, there was already great family concern about the war, especially with Germany.

Marjorie, however, became a teacher in a Junior High School in Baldwin Park, California, to the east of Los Angeles. She enjoyed teaching and enjoyed the students. She later taught at John C. Freemont Junior High School in her home town of Anaheim. While she liked teaching, she wanted to do something to aid the war effort, as Pearl Harbor had plunged the U. S. into the fray. During a summer or two she went to Phoenix, Arizona and learned to fly, and earned her pilot’s license, whereupon she announced to her family that she intended to join the Women’s Airforce Service Pilots (WASP) organization. The summer prior to that she worked in the Douglas Aircraft Factory in Long Beach, California, and when she was accepted as a WASP candidate, she left for Avenger Field, Texas, and was in class 44-W-6.

She sent glowing letters of the experience and of flying. She especially liked flying at night in the starlit Texas sky, and seeing the lights below. She said it was “like flying between two heavens, only you needed to land on the right one.” She wrote of the heat and the blowing sand, and the sun that tanned the skin even through a blouse. She sent home words of WASP songs that were sung, and was amused that the local paper headlines announced “Texans and Americans” invade France. Her very special friend was Eleanor “Irish” Fairchild, 44-W6. Marjorie proved to be a very able pilot, and looked forward to ferrying planes for the war effort. That was not to be, however.

On a cross-country flight, on June 13, 1944, her engine failed, and due to recent heavy rains, there was nowhere to land, so she opened the canopy and “hit the silk.” She was apparently hit by the tailplane and was killed before she hit the ground. She landed very near her plane, and was found by a farmer and his young son.

About 1996, Marjorie’s brother, now a retired Methodist minister, writer and artist, was contacted by Walter Johnson of Amarillo, Texas, the man who, as a 12-year-old boy, was the one who ran out in that Texas field the day Marjorie crashed, and found her and her plane. Walter sent Marjorie’s brother some small fragments of her airplane, which proved to be a difficult envelope to receive, and evoked thoughts of one who will in memory be a beautiful 26-year-old young woman. The Johnson family in Texas, that still owns that land, in 1999 they affixed a stainless-steel memorial marker at the place where she crashed.