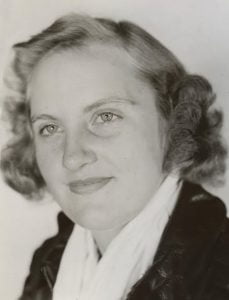 Mary Eaton (Cooper) Cox was born in New York City on January 19, 1924, the daughter of Katherine Hahn Cooper and Howard N. Cooper, MD. She lived most of her life in Watertown, where, with the encouragement of her father, she began flying at the age of 16.

After graduating from Dana Hall in Wellesley, MA, she began her aviation training at Embry Riddle Flying School, FL.

Mary answered a call to help her country by applying to the WASP. Upon her acceptance, she trained at Avenger Field, Sweetwater, TX, graduating in April 1944 as a member of the Class 44-W-3. Mrs. Cox was stationed at Cochran Field in Macon, GA, where she served as a test pilot and flew P19s, Fairchild 24s and AT6s.

When the WASP gained Veterans’ status in 1978, the Department of the Air Force recognized Mrs. Cox’s service with the Victory Medal, the Honorable Service Lapel Pin and the American Campaign Medal.

In January 2009, she received the Distinguished Service Medal. In November 2009, the Secretary of the Army, the Honorable John McHugh, awarded her with the Army Public Service Award.

After World War II, Mrs. Cox worked for American Airlines in New York City briefly and returned to Watertown to work as a flight instructor at the Watertown Airport. It was there that she started to give flying lessons to a naval war hero, George Emerson Cox, Jr. They married on November 27, 1947, at First Presbyterian Church. Mr. Cox died January 9, 1972.

Mary was a licensed real estate broker from 1967 to 2009. She was honored by the Jefferson and Lewis Board of Realtors in September 2009 for her long commitment to the profession. She also volunteered at Samaritan Medical Center for over 60 years. She assisted patients in many capacities through her Bent Twig Group, of which she served as president. She was an honorary member of the Black River Valley Club. On September 5, 2009, she was honored for her 60-plus years of membership and service at the Clayton Yacht Club, of which she served as commodore.

Mrs. Cox was the subject of numerous articles in the North Country and was featured in an exhibit, “Lest We Forget,” at the Jefferson County Historical Society in October 1999. In July 2001, her efforts in World War II were honored at the Antique Boat Museum in Clayton by Martin and Ineke Zonnenberg’s donation of the St. Lawrence Lady’s Skiff, dedicated as the “Mary Cox.” In November 2004, Mrs. Cox was an honored guest at the Syracuse University Air Force ROTC Detachment 535 Dining Out, where she was feted by members of the Hap Arnold Society and she regularly attended WASP.