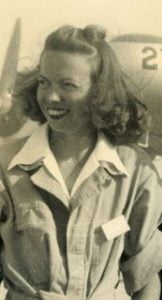 Mary was a Portland native who graduated from Washington High. Soon after graduation she began working in Washington, D.C. as a clerk in the Federal Security Agency’s General Consul Office. The agency was in charge of food and drug safety as well as the Social Security program.

While in Washington, Mary received a scholarship for the Civilian Pilot Training Program that taught her to fly and earned her a pilot license. Within a year she began her six months of training with the WASP.

Although her first assignment was the Air Transport Command at New Castle Air Base, in Delaware, within a few weeks orders quickly began sending her from one Army airfield to another.

On August 14, 1944, 18 months after her WASP graduation, the sky was clear, winds from the south were light, and temperatures were simmering toward 103 degrees. Mary took off in a BT-13 from the Perrin Army Airfield in Texas with Staff Sergeant Orville Eitzen in the rear seat.

This was a basic test flight just to check out the plane’s recently repaired radio. About 15 miles north of the runway, the aircraft suddenly stalled and spun into the ground. The cockpit was open and their seatbelts were undone indicating they were trying to get out, but they were too late. There were no witnesses and the cause of the crash was never determined.