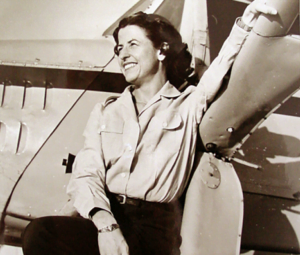 From her own words
p 235
Betty Turner’s

“Out of the Blue and Into History”

“I was born on January 30, 1915, in La Porte, Indiana. I lived most of my life in Sand Springs, Oklahoma. I learned to fly in Tulsa at Harvey Young Airport. My flight instructor was a late-night disc jockey for a radio station, so I learned to fly with music.

My accounting career began as soon as I graduated from school, first in a doctor’s office then Kerr Glass, then to an oil company in Tulsa, Oklahoma in the computer accounting department. I left them to join the WASP in class 43-7.

I was stationed at Hondo Air Base, Hondo, Texas, where I was CO of WASP on the field. We flew the twin Beech on training missions for navigator’s engineering flights. I took four hours to break in an engine and pick-up parts.

After deactivation, I owned and operated Instrument Flight School in California until the land was sold to railroad for industrial use. I moved to San Francisco then back to Houston, Texas. I was secretary/treasurer of the corporation until it was dissolved due to illness of the president.

I assisted Mary Jane Norris with her flight school on Andrau Airpark, Houston, Texas, until she sold the school to become corporate pilot for Enron Corp.

I reached the age of 65 and went on Social Security, but soon again involved in work, doing income tax preparation in my own business.

I retired again, and I am area counselor for the TCE program (Tax Counseling for the Elderly) as a volunteer for IRS, OTC, and AARP.