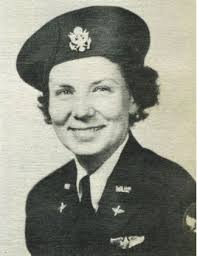 Mary Reineberg Burchard was a test pilot with the Women Airforce Service Pilots, a Congressional Gold Medal recipient, a proud veteran, doctor, and beloved mother and friend.   Even within weeks of her passing, whenever Mary heard a plane she’d scan the sky, shake her fist and say, “You lucky stiff!”  The lure of flying never left her.  The call to take her last flight came on January 28, 2012 surrounded by her faithful crew of children and loving caregivers at Aegis Living of Laguna Niguel California.  She was 95.

Mary was born in 1916 in York, Pennsylvania.  She was the oldest child of a well-known York shoe store family, Jacob and Salome Reineberg.

Inspired by Amelia Earhart’s flying feats, 12-year-old Mary stood up in her class at St. Mary’s Elementary School and announced, “I’m going to be an aviatrix!” Mary always laughed at how audacious it must have sounded for this little girl to have such grand ambitions.

Upon graduation from high school, Mary was among the first women to study at Temple University’s School of Surgical Podiatry in Philadelphia.  She graduated at 21 as a surgeon-podiatrist, being given the highest honor ever awarded a woman in clinical proficiency.  Mary returned to York to open her practice.

While she worked hard as a young doctor, the dream of flying never went away.  It took 11 years from her grade school pronouncement to do it.

Shortly after the attack on Pearl Harbor, young men in small towns across America united and lined up at the enlistment offices to serve their country at war.

And a few courageous women.

At 28, Mary Reineberg Burchard peered out the window of her medical practice at the young enlistees marching off to war on the street below in York, Penn.

Mary, known to everyone in town as “Dr. Mary,” left her podiatry practice and visited her father in his shoe store.

“I want to join the military,” she said.

When her father finally gave his blessing, Mary marched down to city hall with her flight log in hand. The enlistment officer read her log and said, “We’ve been looking for someone like you.”

Mary got her pilot’s license through the national defense program where she and 9 male pilots made up the Civil Air Patrol – York Squadron 301.

Out of 25,000 applicants, Mary was one of 1,830 accepted into the visionary and grueling Women Airforce Service Pilots training. With the WASP she learned to fly the “military way” at Avenger Field in Sweetwater Texas. Only 1,074 women earned their wings and Mary Reineberg was one of them.  Based in Marana, Arizona, Mary was a test pilot on the AT-6, an advanced trainer plane that was the essential part of training men for combat. Above the Arizona desert she put these planes through hammerhead stalls, barrel rolls, loops and other gut-wrenching maneuvers to diagnose problems, make sure bolts and oil lines stayed on, and landing gears locked in place. Mary loved every minute of it.

Her WASP dream came to an end with the sudden order to deactivate all the women military pilots to make jobs for the men who were not needed in great numbers in combat. Though shattered by this, Mary looked for how else she could help her country and joined the American Red Cross. Mary was sent to Naples and southern Italy where she spent 18 months as director of social activities for American troops waiting to go home. This was a perfect fit for Mary who was gregarious, enterprising, fun-loving and a natural organizer. She loved Italy, loved the work, and proud she could help until the war ended.