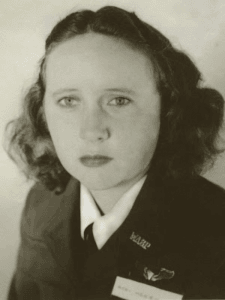 “I was crazy about flying and as a little kid, even through grade school, I built model planes.”

Anderson was born July 12, 1921, in Eureka. Her parents – E.C. and Leota Roby – had means. She attended elementary and high school at Mrs. Harris’ School for Girls in Miami Beach, Florida, where her parents lived during the winter. The Robys would return each summer to their Flint Hills ranch. According to her daughter-in-law, Madeline Anderson, the first winter a young Meriem stayed in Eureka, she helped train 400 head of horses to send to the Army in France.

In 1942, she joined the Civil Air Patrol in Wichita as a lieutenant, transportation officer and pilot. She began flying in Wichita that year and would commute from the ranch in Greenwood County to Wichita on a motorcycle. She joined the Women Airforce Service Pilots on Oct. 4, 1945. She was one of five women from Wichita’s air patrol who received WASP wings.

“I wanted to fly ever since I was a little kid,” Anderson told The Wichita Eagle in 2004. “My parents weren’t real happy about it, but they felt differently after I got my wings.”

WASP took the same ground school and flight training as the men, except for combat flying. They flew aircraft from factories to overseas bases, towed targets for live anti-aircraft practice, transported cargo and test-flew repaired planes at U.S. bases before they were turned over to the male pilots. It was a select but dangerous duty. Of the 1,074 women who passed all the training, at least 38 were killed in the service.

Anderson was stationed at Enid Army Air Base in Oklahoma, test-flying trainers after they had been repaired or worked on for any reason.

Unlike other women’s branches of the service, WASP were slow to be recognized as members of the military instead of civil-service employees. In 2010, Anderson and about 200 other WASP went to Washington to receive Congressional Gold Medals for their service.

At the end of the war, when the WASP were disbanded, she married Alexander “Harry” Anderson Jr. in Kansas City on December 31, 1945. They lived on her family’s ranch, calling it the “Dead End Ranch.” 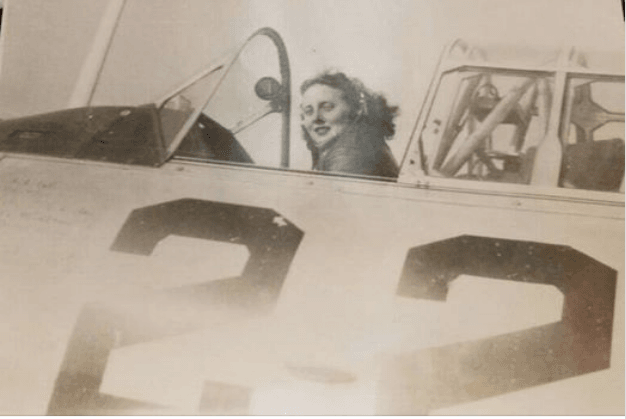 “There were no Hallmark movies with her,” Madeline Anderson said.

She raised appaloosa horses, buffalo, chickens, guineas and peacocks and had 17 cats and 34 dogs.

Throughout her life, she faithfully maintained her ties with the other WASP, returning each Memorial Day weekend to Sweetwater, Texas, where a museum to them had been established.

“You could tell when these women got together — from a distance, they looked like these silver-haired ladies with walkers and wheelchairs,” Madeline Anderson said. “But when you listened to them, they were just a bunch of pilots sitting around. The ones that knew each other insulted and loved each other. She had great camaraderie with them and they meant the world to her. one thing that endured in her life was that she was a WASP. She was most proud of that and we would drive from Eureka to Sweetwater each year where we had wonderful times. She was part of those scrappy few who still got together.”

Anderson was a life member of the Women Airforce Service Pilots, the Women Military Aviators Association and The Ninety-Nines, International Organization of Women Pilots.

She continued flying until the 1970s.