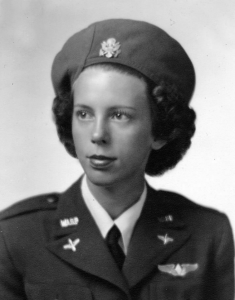 “I was the absolutely minimum of everything that you could be to get into the WASP.    I thought I could, and I applied myself and I made it. I think anybody who really wants to do   something very bad, if they work at it, and they focus, and they concentrate, they can do it.”

At birth Mildred Banford Inks weighed only a few ounces over three pounds and was placed in an improvised incubator – a shoe box with a lamp. Her prospects for survival were slim. She not only survived, but went on to become a strong life force, impacting many people and achieving many goals, often as a pioneer. That she survived, and ultimately thrived, may in part be due to her parents’ stock.

Her father was Roy B. Inks, a business man in Texas who helped establish the Highland Lakes, one of which is named after him. Her mother, Myrtle Moss Inks, gave her some of the Moss family stock, pioneers of Texas with roots to the Battle of San Jacinto and a family ranch west of Llano. She grew up in Llano, Texas, where she enjoyed a good life learning, among other things, how to play tennis with an unorthodox serve and many improvised self-taught shots. However, the Great Depression, the early death of her father, and World War II changed things dramatically.

Before America entered WWII, Millie had already graduated from the Texas State College for Women, where she majored in journalism.  In June 1942, she married Bill Davidson, a B-17 pilot.  After her husband was shot down and killed over the North Sea while on a mission in Europe, Millie took flying lessons at Doc Haile’s airport in Austin and soloed after only 11 days, successfully applied to the Women Airforce Service Pilots (WASP) training program and on Nov. 5, 1943.

Millie reported to Avenger Field near Sweetwater, Texas, for seven months of intensive flight training in Class 44-4 as one of the 1,830 applicants who were accepted into the program and one of the only 1,074 talented women to complete the program — to become one of the first women in our history to fly military aircraft.

Millie was appointed Flight Lieutenant, Flight #1—where she was the one who shouted cadence while she and her fellow class members marched to their ground school classes and to the flight line.

Millie was part of a group of extraordinary, patriotic women who wanted to do even more for their country than what those hundreds of thousands of dedicated American women — symbolized by “Rosie the Riveter” — were already doing here at home while their husbands, brothers, and sons where fighting the war “over there.” These WASP would fly transport, weather, target towing, ferrying, maintenance checkout and other missions; they would fly trainers, fighters and bombers to and from factories and air bases; they would make sure that those marvelous aircraft built by the “Rosies” were ready for combat service overseas.

Millie graduated on May 23, 1944, a day and a ceremony she will never forget. For, in addition to receiving her silver WASP wings, Millie also accepted the Air Medal for her husband who had given his life for his country only a short time before. 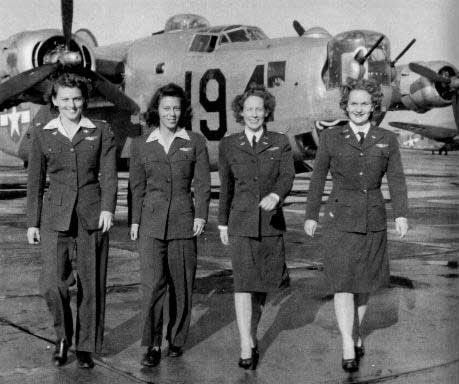 After graduation, Millie was assigned to Maxwell Field, Ala., where she was fortunate to fly under an officer who believed in the capabilities of these young women. There, she flew an amazing number and variety of military aircraft, including B-17s, C-45s, BT-13s, AT-6s and the venerable B-24 “Liberator” bomber, an aircraft Millie says, she “usually flew for four or five hours after repairs to make sure they were ready for combat service.”

Nancy Parrish, a former Public Broadcasting Service producer/director, whose mother was also a WASP, said once: “These women went through the same flight training as the men… They flew dilapidated planes; they flew every kind of aircraft, and they flew every kind of mission except combat.” A few exceptionally qualified women were allowed to test rocket- and jet-propelled aircraft.

The WASP program would last only 18 months, but during that period Millie and her fellow patriots would be stationed at 120 Army Air bases across the country; would fly sixty million miles in every kind of mission; would receive hardly any recognition and see 38 WASP and WASP trainees pay the ultimate sacrifice for their country.

In December 1944, the WASP program was suddenly and unceremoniously terminated. WASP did not receive any military benefits and little or no recognition for their wartime service.

Inexplicably, the WASP records were classified and remained sealed for 33 years. Even historians had no access to the records containing the WASP significant contributions to the war effort, thus denying Americans the opportunity — the duty — to honor these heroic women.

Nancy Parrish stated: “When the WASP disbanded, these women had to pay their way back home. Thirty-eight of them were killed, but because they had no benefits, the women had to take up collections to get their bodies back home to their families.”

The army would not even allow the U.S. flag to be put on fallen coffins of the WASP corps.

Millie, however, said she harbored no ill will or bitterness towards the government and considered herself to be “one of the luckiest women in the United States to have had the opportunity.”

After the war Millie married Edwin Dalrymple, a friend from Llano who had been a Spitfire fighter pilot in the war. During their first 20 years of marriage they raised three children while Edwin was an FBI agent, first in Washington DC and later in Houston. They moved to Austin in 1967 and were married for 60 years before his death in 2006.

Millie worked part time as a substitute teacher while the kids were growing up in Houston. In Austin, she worked full-time to help earn money and channel her energy. In those jobs, she again showed her pioneering spirit, including setting up and managing the first word processing center in Austin. She also took up tennis again, winning dozens of tournaments and eventually achieving a national ranking as a senior doubles player.

Later in life, she became a sought-after speaker, describing her adventures as a WASP.

In 1977, after a two-year WASP “Battle of Congress,” President Jimmy Carter signed legislation granting the WASP corps full military status for their service.

Subsequently, in 1984, each WASP was awarded the World War II Victory Medal and many of them also received the American Theater Ribbon/American Campaign Medal for their service during the war.

Finally, in 2009, Congress was pressured into granting the WASP the Congressional Gold Medal — legislation that President Obama signed on July 1, 2009.

In March 2010, Millie, along with approximately 200 surviving of the WASP corps, traveled to the U.S. Capitol to accept the Congressional Gold Medal, a well-deserved and long overdue honor for their distinguished and trailblazing service during World War II.