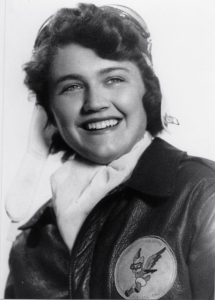 Millicent was born to George and Mary Evision Peterson (of Iowa) near Lodgepole, NE on the family farm. When she was six years old, a pilot landed his plane on their property telling her, “Don’t touch that plane, little girl.” That was the wrong thing to tell Millicent! It seems that was the very day she decided, without a doubt, that she was going to be a pilot. Six years later, when she was twelve, she had her first ride in a plane with a crop duster who charged $5 a ride. She traveled to an airstrip in Ogallala, Nebraska in 1943 where she did learn to fly. When she requested a ride from her mother to Kansas City, she fibbed and said she was going shopping for school clothes. She was presented her wings by General Henry “Hap” Arnold, who led the Allied forces in an air campaign that eventually helped to topple Hitler.

During 1943 our government put out a call for some aviators. They were needed as a result of the “severe loss of male combat pilots” in the war. Still, the Army Air Force was very selective. More than 25,000 American women applied for training, but only 1,830 were accepted and took the oath. Millicent was one of those chosen. They were called “Fly Girls.” She told The Spokesman-Review in 2010 that she could drive a truck and a car by the time she was 10 and did not doubt she could qualify for the WASP. She says she was inspired by Evelyn Sharp.

After being selected out of about 25,000 WASP applicants, she received her wings from Gen. Henry “Hap” Arnold, who led the Allied air campaign that toppled Hitler. She spent a year as a female aviator in Texas before the program ended in 1944, mainly flying an AT-6 Texan, towing a target so male pilots could train in air-to-air combat, her family members said. “She liked to say our side shot at her,” said her daughter Martha Young. She often recounted to her children an exchange with a man refueling her aircraft in Carlsbad, N.M., who said he should be flying the plane. “I’m the man,” he told her, according to her children’s retelling. To which Millicent Young replied, “If you were, I would have noticed.”

The WASP went through the same rigorous flight training as the male Army Air Forces’ cadets. They also took many of the same risks, sometimes with planes that were new and/or had problems. Over the program’s two-year span 38 of the Fly Girls died – including Evelyn Sharp, who had inspired Millicent. Millicent herself specialized in towing targets for gunnery practice, she recalled, with 100 feet of distance between the targets and the AT-6 she was flying. This was at a female only air base in Sweetwater, Texas.

But the government position was that the WASP were not actually military. This manifested itself even in the way their dead were treated. The military did not pay for the burials, nor did it allow gold stars in their parents’ windows or flags on their coffins. This seemed so unfair, but it was what happened.

The Fly Girl program ended suddenly. With victory in WWII almost certain, on Dec. 20, 1944, the WASP were quickly, quietly and unceremoniously disbanded. There were no honors, no benefits, and very few thank-yous, if any. They had paid their own way to enter training, they had to pay their own way back home. The WASP military records were immediately sealed, stamped ‘classified’ or ‘secret,’ then filed away in dusty and obscure government archives, unavailable to the historians or scholars who wrote the history of WWII.

However, stories were told, eventually the information became known, with the help of the WASP’ “Wings Across America,” an organization who was dedicated to educating the American public about their service. There also have been exhibits at many museums including the Smithsonian. Thousands of women aviators flying aircraft have benefited from the service of the WASP and followed in their footsteps.

For a short time after the war, Millicent worked as a commercial pilot. She then attended the University of Nebraska in Lincoln on a scholarship from the Union, Pacific Railroad. There she met and eventually she fell in love with another pilot, Bill Young who had flown for the Army Air Corps, and they married. She became the mother of five and for many years she devoted herself to being a mother and wife.

Millicent Young worked various jobs, parking cars at the Antlers Hotel, selling encyclopedias, even penning a food column for The Gazette, then called the Gazette Telegraph. She spent more than two years working for the El Paso County Department of Human Services, being named “Working Woman of the Year” by the state in 1985.

The family moved to Colorado Springs in 1952.

She continued to fight to get WASP full military status. Finally, in 1977, her hard work paid off and her fight was won. She pledged to gather 1,000 signatures for that legislation, visiting bars across Colorado and Nebraska to collect them from men who often offered to buy her a drink after they had given their autograph, her daughter Martha Young said. Another victory for Millicent Young.

In the interview in 2010, she was asked if she felt bad about the past treatment received by herself and the other Fly Girls, she said no. “Why should I forget the good times,” she commented with a wide grin, “just because somebody was stupid?”

Her son Bill Young has written a book about his mother and the WASP, called “Going for the Gold.”

Young and other surviving WASPs were awarded the Congressional Gold Medal, among the nation’s highest civilian honors, in 2010. 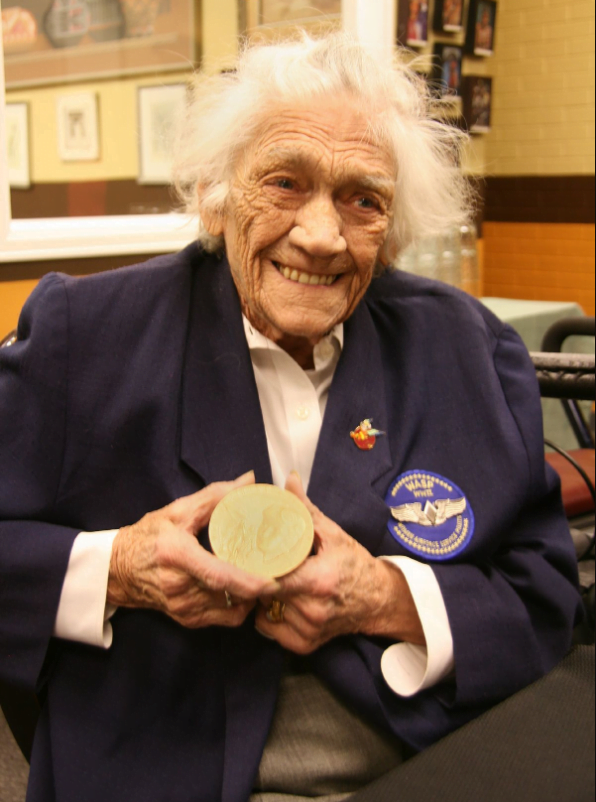