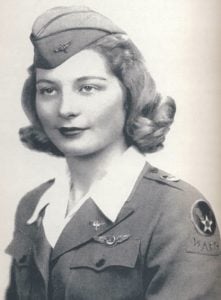 “The Women’s Auxiliary Ferrying Squadron was started in 1942 with the appointment of Nancy Love as director of 28 highly qualified civilian women pilots stationed at New Castle Army Air Base. “The Originals”. as they called themselves, began by ferrying light aircraft and primary trainers then moved to larger aircraft including pursuit planes like the P-51. In August 1943, the WAFS and the Women’s Flying Training Detachment were merged into one program named the Women Airforce Service Pilots or WASP.

Nancy Batson was born and raised in Birmingham, Alabama. While attending the University of Alabama she received a private pilots certificate in the Civilian Pilot Training Program in 1940 and received her Bachelor of Arts degree in 1941. Her parents bought her a Pope J-4 Cub Coupe and she used it to get her commercial certificate and instructor’s rating. Ms. Crews was hired by Pan American Airways as a control tower trainee and by Embry-Riddle in Miami as an instructor in J-3 Cubs on pontoons.

In October 1942, she traveled to New Castle Army Air Base near Wilmington, Delaware to join the Women’s Auxiliary Ferrying Squadron (WAFS). She had accumulated more than 500 hours of flight time and had two additional flight ratings: multi-engine and 200 horsepower. After passing her acceptance flight, she was checked out in some primary trainer and liaison aircraft. 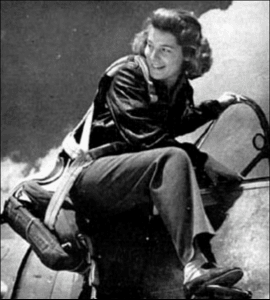 Her first ferrying job came on November 5th, 1942 when she and five other WAFS pilots flew Fairchild PT-19s from the factory in Hagarstown, Maryland to an Army training base near Chattanooga, Tennessee. A year later, Nancy Batson along with 9 other WAFS made history when they became the first women assigned to the Air Transport Command’s Pursuit School in Palm Springs, California. After less than 3 weeks of ground school, Nancy Batson soloed a Republic P-47 “Thunderbolt” – one of the first women to fly the plane. Since the P-47 was a single seat aircraft, her first flight was also her first solo flight. On 1 January 1944, she graduated a fully qualified pursuit plane ferry pilot.

After nearly a year of ferrying high-performance aircraft, she demonstrated her superb piloting skill while delivering a P-38 “Lightning” from the Lockheed factory in Burbank, California to Newark, New Jersey. She took off from Pittsburgh, Pennsylvania on the trips’ last leg and noted a problem with one of the engines and decided to return to Pittsburgh to have it checked out. However, when she tried to lower the landing gear, the nose gear stuck in a semi-retracted position. She followed emergency procedures to try to get the nose gear to lock in place – pumping the manual emergency hydraulic pump in the cockpit and flying “zooms” to use g-forces to lock the gear in place, but nothing worked. Finally, she was able to get the gear down by flying a “zoom” while firing a compressed gas cartridge to be used as a last resort to force the gear down. She then made a relatively routine landing and saved the $115,000 aircraft. 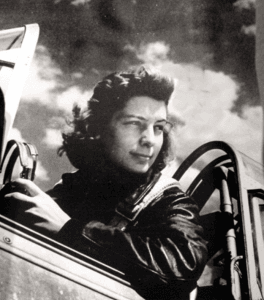 On December 19th, 1944 — one day before the WASPs were deactivated — Nancy Batson flew her last pursuit plane when she ferried a new P-47 from the Republic factory in Farmingdale (Long Island), New York to the overseas embarkation point in Newark, New Jersey. Nancy Batson accumulated about 900 hours of flight time ferrying more than 25 types of military aircraft including L-4, PT-19, AT-6, C-60, P-38, P-39, P-40, P-47, P-51, and A-20s. During this time, she received an Army Air Corps instrument rating.

In 1946 she married Lt. Colonel Paul Crews and had three children. In California she was a part-time instructor at Rose Aviation, flew in three Powder Puff Derbies and bought a Piper Super Cub to tow gliders and aerial banners. Ms. Crews bought a Schweizer 1-34 and 2-33, receiving a glider commercial certificate, instructor rating and Silver badge. She has also owned a Taylorcraft and Mooney Mite which was donated to the Southern Museum of Flight in Alabama. She was mayor of California City and in 1989 was inducted in the Alabama Aviation Hall of Fame.