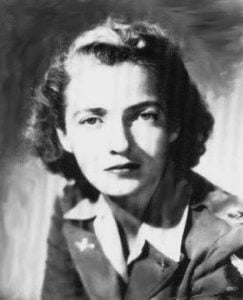 Founder of the WAFS – the Women’s Auxiliary Ferrying Squadron

“I have no idea what made me catch the flying bug. A ride in a tandem two-seater, single-engine Fleet Biplane was my undoing and from then on, I knew what I wanted.”

Born in Houghton, Michigan on February 14, 1914 as the daughter of a wealthy physician, Harkness developed an intense interest in aviation at an early age. At 16, she took her first flight and earned her pilot’s license within a month. Although she went to all the right schools, including Milton Academy in Massachusetts and Vassar in New York, she was restless and adventurous. In 1932, by the end of her freshman year, dubbed, “The Flying Freshman!”, she earned her commercial license and received national attention. At Vassar, she earned extra money taking students for rides in an aircraft she rented from a nearby airport.

In 1936, Harkness married Robert M. Love, an Air Corps Reserve major. They built their own successful Boston-based aviation company, Inter City Aviation, for which Nancy was a pilot. She also flew for the Bureau of Air Commerce. Love entered air races in 1936 and 1937, competing In the National Air Races in Los Angeles and Detroit. After finishing second in the Detroit race, she stopped competing. In 1937 and 1938, Love worked as a test pilot, alongside famous air racer Frank Hawks, for the Gwinn Air Car Company, performing tests on various aircraft modifications and innovations. In one project, she served as a test pilot on the new tricycle landing gear, which subsequently became standard on most aircraft. In another project, she helped mark water towers with town names as a navigational aid for pilots.

In May 1940, Nancy proposed the Air Corps Planes Division, headed by Lt. Col. Robert Olds, in which experienced women pilots could be used to fill the growing need for qualified ferry pilots. Despite having Olds’ support, Gen Hap Arnold rejected the idea. Biding her time, she persevered, gaining valuable experience during America’s period of neutrality by ferrying new planes to Canada for transfer to France and Britain.

After Pearl Harbor, Bob, Nancy’s husband, a major in the reserves was called to active duty and assigned as deputy chief of staff at Air Corps Ferrying Command headquarters in Washington. Nancy became an operations planner in the Ferrying Command’s northeast sector office in Baltimore, commuting daily between Washington and Baltimore in her Fairchild 24. By the summer of 1942, the AAF’s new Air Transport Command faced a critical shortage of trained pilots to deliver airplanes coming off assembly lines. Col. Tunner, Air Transports Commander, recognized Nancy Love as the ideal person to organize and lead the Women’s Auxiliary Ferrying Squadron or WAFS. If the first squadron was successful, other women’s squadrons would emerge. 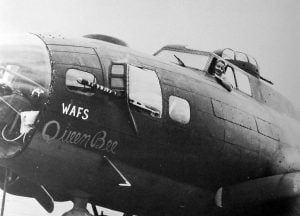 Nancy Love’s WAFS conducted their first operation ferry mission in late October 1942, delivering liaison planes. Later that year, they ferried trainers. From April to August 1943 four more classes graduated from the women’s pilot courses, bringing the WAFS strength to over 225 women. Late in August 1943, the new Women Airforce Service Pilots, or WASP, program superseded the WAFS. Meanwhile, Nancy had been determined from the beginning to challenge the Army Air Forces policy that limited women ferry pilots to flying light, simple aircraft. She personally demonstrated the capabilities of women pilots to advance to highest performance aircraft in the same way that male service pilots did.

Nancy was the first woman to fly virtually all the Army Air Force’s complex, high performance combat aircraft, such as the new P-51 Mustang and P-38 Lightning fighters, the four-engine B-17 Flying Fortress heavy bomber, and various multi-engine attack aircraft, medium bombers, and transports. Her example led the way for her original WAFS to also ferry combat aircraft and they, in turn, blazed the trail for a significant number of later women pilots to follow in their footsteps.

Under Gen. Tunner, Nancy was WASP executive responsible for all women ferry pilots. At it’s peak in April 1944, the ATC Ferrying Division had 300 women ferry pilots and made 50 percent of all deliveries of fighters in the US that year. Eight months before the war ended, the Army Air Forces disbanded the WASP program in December 1944. In 1945, the Army Air Forces asked President Truman himself to sign the Air medal it awarded to Nancy for her wartime accomplishments. Shortly before Nancy love died in 1976, the order of Fifiella, the WASP alumni organization, named her “Woman of the Year.” Thirteen years later, in 1989, she was enshrined into the Michigan Aviation Hall of Fame.

Nancy Love’s remarkable skill, singular vision, perseverance, and leadership by example were crucial to the overall success and level of accomplishment achieved by the AAF’s women pilot program. But beyond that, her view of how to integrate and utilize women in the military establishment stood in contrast to the contemporary concept of female pilots in a gender-specific “Women’s Airforce” within the Army Air Forces. Instead, she envisioned pilots—who just happened to be women–serving in the military alongside men, simply to get a mission accomplished, on the same basis as their male counterparts. That idea may have been ahead of its time, but is consistent with contemporary social thought and actual policy in the armed forces today – the most significant and enduring part of her legacy.

Love was posthumously inducted into the Airlift/Tanker Association in 1996, the Michigan Women’s Hall of Fame in 1997, and the National Aviation Hall of Fame in Dayton, Ohio in 2005. A statue dedicated to Nancy Harkness Love is at the New Castle County Airport in Delaware.

The National Aviation Hall of Fame
Amazing Women in History