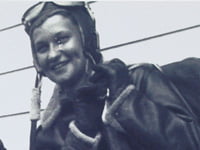 In February 1943, Nancye was inducted into the fourth class of Women Airforce Service Pilots (WASP). In April 1943, Nancye was transferred to the first and only all women’s base in Sweetwater, Texas where she graduated from the WASP program and received her Wings.

During her service, she was responsible for radio control work and for towing a target sleeve behind her B-34 so that anti-aircraft batteries could practice shooting. In December 1944, Nancye and all other WASP were taken off of Active Duty. At this time, WASP were not considered a part of the United States military and they did not receive any Veteran’s benefits.

After her service, she worked for the Civil Aeronautics Administration in Albuquerque, New Mexico. Later, she went on to teach at an elementary school in El Paso, Texas for twenty years.

The WASP may have been sidelined for years, but these first female Air Force pilots had their work cut out for them. The requirements for women to become military pilots — at least 500 hours of flying experience — were more stringent than for men. They were paid a mere $250 per month, slightly less than men, and the women had to pay for their own lodging, food and uniforms.

Then there was the social stigma — and the occasional jabs that came with being in a male-dominated atmosphere.

Also, unlike the men, they did not hold military rank. They were all flight officers.

Of the more than 50,000 women who applied, only 1,830 were accepted and 1,074 graduated from the training program. These women were stationed at 120 army air bases around the world, and flew a total of 60 million miles. Their duties involved everything from ferrying planes to training fighter pilots to chemical missions, but they were barred from actual combat.

Despite the important role the WASP played in the war effort, they received few benefits and little recognition.

Of the group, 38 women died in uniform. Their bodies were returned to the United States without any official ceremony and at the expense of their families, because they were officially civilians.

The rest of the women had to pay the expenses for their journey back home. The WASP records were sealed after World War II ended, until 1980, and the women in the program didn’t receive veteran status until 1979.

On March 10, 2010 the WASP were finally awarded the Congressional gold medal, nearly 66 years after their service.