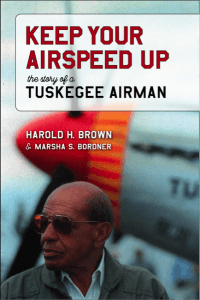 Brown graduated from Tuskegee in May 1944 and was assigned to the 332nd Fighter Group. He flew 30 missions as a bomber-escort fighter pilot before being shot down on a strafing mission. Captured, Brown became a German POW, all before he was 21 years old.

Brown was liberated by General George Patton’s forces in 1945. After the war ended, he continued to serve in the U.S. Air Force, retiring in 1965 as a Lieutenant Colonel, with 23 years of active duty service.

Building a new career after his retirement from military service, Brown joined a small technical college, in Columbus, Ohio. While a teacher and educator, he earned both a Master’s Degree and Ph.D. in vocational-technical education from Ohio State University. He eventually became the Vice President of Academic Affairs at Columbus Technical College. Over the two decades, he helped the small college grow from 500 students to close to 9,000.

Brown’s new book covers his early years in Minnesota, his time during World War II and the Strategic Air Command, and his experiences as a respected and beloved Ohio educator.

At 92, he has not slowed down, keeping active by traveling and making speeches to young and adult audiences describing how he overcame adversity in a segregated America. He encourages young students to make wise decisions about their future, to study hard, and to take subjects leading to interesting, well-paying careers. He remains a Tuskegee Airman and an American Patriot; and is a living role model and mentor for young Americans of all ages, colors and ethnicities.

Dr. Brown has been an avid supporter of and advisor to the CAF Red Tail Squadron. His guidance has helped shape their educational outreach programs, and he has worked in tandem with pilots and staff to reach record numbers of people at events he attends with the RISE ABOVE Traveling Exhibit and P-51C Mustang Tuskegee Airmen.