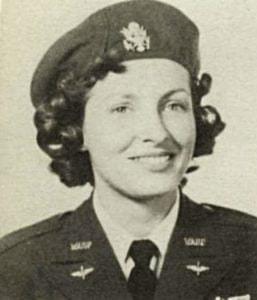 “I just did what I was expected to do and tried to do it the best way I could.”

Ola Mildred Rexroat was one of six South Dakotans to serve in the WASP and, as an Oglala Lakota, is believed to be the only female Native American to have served in the WASP.

Rexroat was born in Ogden, Kansas, to a white father and an Oglala mother. The family moved to South Dakota when she was young, and she spent at least part of her youth on the Pine Ridge Reservation. She attended public school in Wynona, Oklahoma, for a time, and graduated from the St. Mary’s Episcopal Indian School in Springfield, South Dakota, in 1932. Rexroat initially enrolled in a teachers college in Chadron, Nebraska, but left before completing her degree to work for what is now the Bureau of Indian Affairs for a year. She earned a bachelor’s degree in art from the University of New Mexico in 1939. After college, she again worked for the Bureau of Indian Affairs in Gallup, New Mexico for a year.

Rexroat next worked for engineers building airfields, where she decided to learn how to fly. In order to do so, she would need her own airplane or to join the WASP. Selecting the latter, she moved to Washington, D.C., with her mother and sisters, and was also employed at the Army War College. Rexroat then went for WASP training in Sweetwater, Texas, and was assigned the dangerous job of towing targets for aerial gunnery students at Eagle Pass Army Airfield after her graduation. She also helped transport cargo and personnel.

One day a superior flipped her the keys to a jeep to retrieve a training target in a field after she landed one day.

“This was a big problem for me, because I didn’t know how to drive,” Rexroat said. “I had never learned how to drive a car. I don’t think anybody trusted me with a car, but I could fly a plane.

During an interview she was asked if she ever worried about the dangers of flying or getting shot, Rexroat shrugged.

“I never gave it a thought. You couldn’t worry about things like that. … You can’t live forever,” she said. “They checked the target after we came down, and of course, it was to our credit if it had lots of holes in it; that meant we had been maintaining our altitude and heading.” 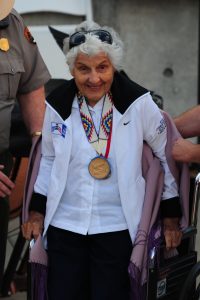 In 2007 she was inducted into the South Dakota Aviation Hall of Fame.

Rexroat died in June 2017 at the age of 99. Immediately before her death she was the last surviving WASP in South Dakota and one of 275 living WASP out of the original 1,074. Several months after her death, the 28th Bomb Wing dedicated the Airfield Operations Building in honor of her.