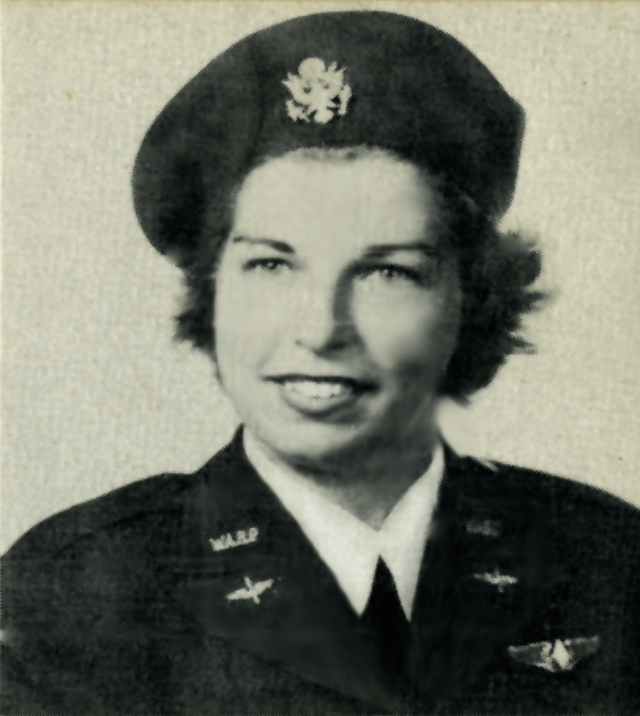 Patricia Blackburn was born September 10, 1921 in Quincy, IL the daughter of Bryson and Margaret Smith Blackburn.

When Pat was about 8 years old, she had her first plane ride on a Ford tri-motor airplane, and she never forgot the experience. In 1937 when Pat was in high school, she had the opportunity to hear the pilot Amelia Earhart speak, and it made a lasting impression on her especially since Amelia Earhart disappeared later that year in her round-the world flight.

Pat was a 1939 graduate of Quincy High School and attended the University of Iowa. During World War II, she enlisted in the Women’s Air Service Patrol (WASP) where she was trained as an Air Force service pilot. Five women from Provo, Utah took lessons and applied to WASP, and 1,850 women were accepted for training at Avenger Field in Sweetwater, TX. The purpose of the program was to free male pilots for combat duty. Training took six months, and upon graduation, she was assigned to Eagle Pass, Texas, gunnery school, where the she had various assignments including ferrying airplanes from factory to base, towing targets for gunnery practice, testing new or repaired aircraft, and basic and advance flight instruction.

After deactivation, she enrolled with four other ex-WASP in a seven months CAA course in Seattle, which included intensive training in Morse code as well as aircraft communications. After completing the course, they were all assigned to various CAA stations in Alaska. Pat’s assignment was in Fairbanks, Alaska. After a winter of minus 40 to 50-degree weather, she returned to Seattle and joined Pan America Airlines as a stewardess flying to Alaska. After a year and a half of flying this route, she transferred to the Pan Am San Francisco base, flying routes to the Far East, India and Australia. One of my flights from Hawaii to Wake Island, she enjoyed a visit with Jimmy Doolittle and his wife.

After leaving the west coast to be closer to my home in Illinois, Pat took a position with an insurance company in Madison, Wisconsin, and eventually returned to her hometown, Quincy, where she met and married her husband Joe, the Vice President and General Manager of WGEM TV and radio station.

Pat stated in an interview with fellow WASP Betty Turner “I have always felt my time with the WASP was a major experience in my life for which I am forever grateful.”