To encounter an original Tuskegee Airman is a rarity. These men and women who served as America’s first black military pilots and their support personnel were part of something that changed the course of history and opened the door for generations to come. But 92-year-young James Cooper – part of this elite group – has a most special claim to fame. He was also a Buffalo Soldier, trailblazers with an equally important legacy to share. 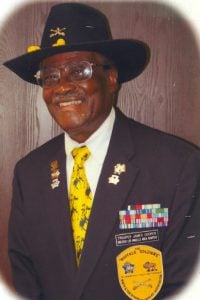 Cooper, born and raised in New Orleans, has had the distinction of serving in the US Army, the US Army Air Corps, the US Air Force and the US Air Force Reserves, spending a collective 25 years in service to our country. His time in the Army included an assignment to the 92nd Infantry Division – part the Buffalo Soldiers, all-black regiments that hail back to the Civil War era. This segregated 92nd Infantry Division was the only African American infantry division to see combat in the European theater during WWII.

“What makes the Buffalo Soldiers unique in history was not just that they were courageous, but self-sacrificing and they loved their country. Those things can be found in most military men today,” explains Cooper. “What made them outstanding was that they should possess those qualities in a society that was determined to brand them as inferior.”

During his military tenure, Cooper’s service not only included time in WWII, but the Korean and Vietnam wars as well. He enlisted at the age of 17, knowing that things like education, training, medical care and steady pay would be good for his future. At that time he was working at a factory for a meager salary of $2 a day. “It was a way for me to survive. I did it for my country. The service was good to me and I was good to the service,” said Cooper.

In those days of great disparity, including racial segregation and limited rights for people of color, Cooper remembers that it wasn’t an easy task to serve one’s country or get a good education as a black person. “We didn’t have the same opportunities to go to school to learn. We didn’t have the same chances as the rest. We had to prove we had to do these things, but I was determined to go forward. We ignored what the public said about black people and we played a great part in military service.”

As a Tuskegee Airmen, Cooper was an airline runner, an important support role to supply the parts needed for the aircraft to keep them flying. “It was a good experiment. When it first started, they said that blacks couldn’t be pilots,” said Cooper. “What they accomplished was very important. They didn’t believe we were capable, and we didn’t know why they would believe so. But it gave me more courage to pursue what I think is best for the service and it make me feel good to serve my country.”

Cooper has inspired people of all ages as part of the Tuskegee Airmen and the Buffalo Soldiers, and an active participant in the groups’ outreach activities. He’s passionate about helping young people and encouraging everyone to get an education, regardless of race or national origin.

“Keep on going, don’t give up. Use your brain and become successful in whatever you do,” he says. “I want them to remember what we accomplished as black people… and that we’re still marching on. I’ve had a lot of experiences and I never let anything discourage me, but it encouraged me to go on.”

We salute Master Sergeant James Cooper for his service to our country, and his ongoing commitment to share the unique history and inspirational legacy of the Tuskegee Airmen and Buffalo Soldiers. He is a model of determination and grace, turning adversity into success. RISE ABOVE!